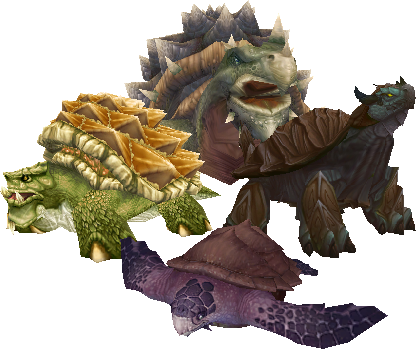 There's a good reason a defensive strategy is called "turtling."[1]

Turtles are ancient creatures that have changed little over the eons. There are three main categories: sea turtles, land tortoises and fresh-water-dwelling terrapins.[2]

Turtles in World of Warcraft are similar in appearance, but much greater in size than their real-life counterparts. They can be found both on land, and in water. In Warcraft, turtles, sea turtles, and tortoises are often essentially the same, only differentiated by environment.

The tortollans are a race of humanoid turtles. 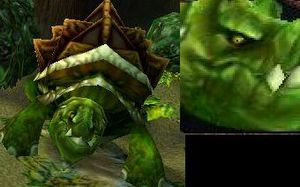 A sea turtle from Warcraft III.

Turtles of different species are found all over Azeroth. Giant sea turtles are native to the southern seas and were captured by the Stormreaver clan during the Second War. The daring goblins who control them are dedicated to destroying enemy ships by launching hazardous, steam-driven canisters containing highly volatile liquids that can shred even the strongest of armor.[3] The tuskarr of Northrend use turtle boats to travel between their different settlements.

Turtles are feared by the naga, who consider them bad luck and give them a wide berth on the shores of Azshara.[4] Softshell turtle meat is considered a delicacy and is the key ingredient in soothing turtle bisque.[5]

One of the demigods in the War of the Ancients was a reptilian warrior with a shell reminiscent of a turtle.[6] In Mount Hyjal, the turtle ancient Tortolla is encountered. He may or may not be the aforementioned reptilian warrior. 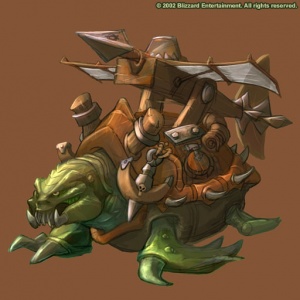 There are several types of turtle mounts available. The pandaren use dragon turtles as their racial ground mounts.

Turtles are a family of Tenacity pets and are tamable by hunters starting at level 10. Players that start as a pandaren hunter will receive a turtle as their first pet. Turtles, through the use of their special

[Shell Shield] ability, reduces damage taken by 50% for 12 sec. This makes turtles great tanking pets in a pinch. There are seven different skins available for turtle pets. The most distinctive ones are

Terrorpene, a turtle with a fiery shell, and 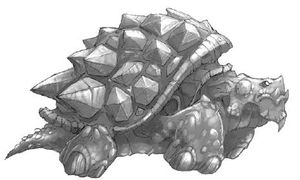 An aquatic druid in turtle form

Sea turtles are aggressive animals with thick, heavily spiked shells and sharp teeth. Some reports say that naga train these creatures and use them in war. Sea turtles trundle along the ground on elephantine legs and attack smaller creatures — or creatures of the same size, if prey is scarce. Any creature striking a sea turtle with natural or hand-held weapons takes piercing and slashing damage from the turtle's barbs. However, weapons with exceptional reach, such as longspears, do not endanger their users in this way.[7]

In Manual of Monsters Appendix Three another type of turtle is described, the Giant Snapping Turtle, but the validity of the source is disputed.