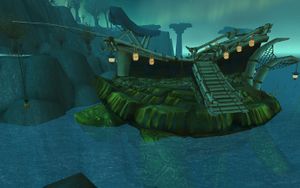 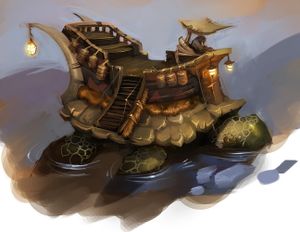 Turtle boats are a form of tuskarr transportation, though the pandaren have a similar concept.

That reminds me of another example: the turtle boat. If you look at Northrend, the continent is shaped a little bit like a crescent, with the two starting zones, Howling Fjord and Borean Tundra, at the ends. There's a port located in the middle of the coast between these zones, and we wanted to have an easy method for traveling between the zones. The method of transportation we settled on is a giant turtle with a deck mounted on top of its shell, very much like the turtles from Warcraft II. It’s simple, effective, grounded in Warcraft lore, but it’s also one of those light moments that are so important to create the iconic Warcraft feel.[1]

In World of Warcraft: Wrath of the Lich King, giant turtles serve as neutral boats between the Tuskarr ports of Unu'pe (Borean Tundra; west side of Northrend), Moa'ki Harbor (Dragonblight; central Northrend), and Kamagua (Howling Fjord; east side Northrend).

In World of Warcraft: Mists of Pandaria, a giant turtle serves as the starting area of the playable pandaren.

During the The Thousand Boat Bash event there are turtle boats at Shimmering Deep in Thousand Needles.