The Tushui Pandaren, often shortened simply to the Tushui,[1] are a group of Alliance pandaren led by Master Aysa Cloudsinger that adhere to the path of the Tushui, one of the two primary philosophies among the pandaren of the Wandering Isle.

Tushui teachings encourage living a venerable life through meditation, rigorous training, and moral conviction. When the Wandering Isle was opened to the rest of the world, pandaren who upheld the tenets of Tushui were drawn to the Alliance due to their similar philosophies.[2] Since then, they have taken part in many conflicts and events throughout Azeroth alongside their new allies.

The Tushui pandaren are contemplative, focused on abstract ideals of justice and morality, and believe that a principled life is the only one worth living.[2] Their idealogical opposites are the Huojin Pandaren, also of the Wandering Isle, but who chose to join with the Horde. Both groups represent the majority of pandaren within their respective factions. 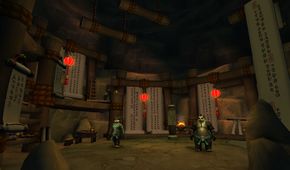 The Tushui Cave of Meditation on the Wandering Isle

The Tushui philosophy and its followers originated on the Wandering Isle of Shen-zin Su some time ago, and was well established by the time the mists of Pandaria fell. At this time, the group was headed by Aysa Cloudsinger, a stalwart and gifted monk, and coexisted in relative harmony with an opposing philosophy in the form of the Huojin.

The future of the Tushui and their fellow pandaren would be forever changed when an Alliance gunship known as the Skyseeker crash-landed into the landmass. In doing so, it mortally wounded Shen-zin Su, and threw the entire island's safety into jeopardy. The pandaren of the Wandering Isle, led by the Tushui and Huojin, were forced to work together with the surviving Alliance crew and Horde prisoners from the vessel in order to save the great turtle. Both philosophies would clash during the crisis, with the Tushui opposing the use of drastic and dangerous solutions. Ultimately, the united effort managed to avert disaster.[3]

In the aftermath of these events, the pandaren of the Wandering Isle turned their attention to the world at large, now open to them. Aysa Cloudsinger and the other Tushui had grown closer to the Alliance since first encountering them, and were attracted to their ideals and beliefs which resonated with their own.[4] When the invitation was offered, the Tushui and many other pandaren agreed to enter the Alliance, while the Huojin and others sided with the Horde.

Aysa would meet with King Varian Wrynn personally in Stormwind City,[5] and the Tushui quickly established a presence in the capital near the Eastern Earthshrine. Before long, they began aiding the Alliance's efforts on the continent of Pandaria and beyond. Representing her people, Aysa became a leader within the Alliance and was present for numerous future events and meetings as part of this role.

During the Alliance-Horde war, the Tushui and Huojin, representing respectively the Alliance and Horde, would fight for control of the Temple of Kotmogu and its ancient mogu artifacts in the Vale of Eternal Blossoms. The Tushui would later establish a small base on the Timeless Isle at the time of the Siege of Orgrimmar from which members of the Alliance explored the island.

The Tushui reinforced the Lunarfall garrison with Lunarfall Guards led by Shield Captain Chien. Their banners can be found next to them. 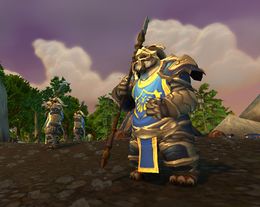 Tushui Sentries on the Timeless Isle

The following scroll can be found at the Shang Xi Training Grounds:

"Discipline is not a war that is won. It is a battle, constantly fought."
- Master Feng

The way of the Tushui is one of a principled life. Followers of this discipline believe there is a moral certainty to the world: one correct path of right and wrong.

These Values are immutable, and must be preserved no matter what the cost. Even if it means self sacrifice, or painful losses in the pursuit of a higher ideal.