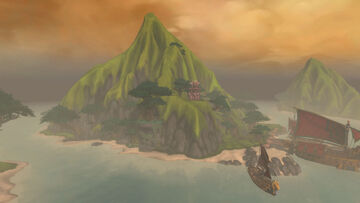 Tusk Isle in the Bay of Kings

Tusk Isle is a small island in the Bay of Kings off the southern coast of Zandalar. Along with Warport Rastari, the Port of Zandalar, and the neighboring Isle of Fangs, Tusk Isle serves as a base for the Zandalari Golden Fleet. The island also has its own watchtower which can be used to send signals across the bay.

Tusk Isle and the other ports in the Bay of Kings has served as the ancient home of the Golden Fleet of Zandalar, one of the most powerful naval forces on Azeroth. At the outset of the war in Zandalar, part of the fleet was stationed at Tusk Isle, notably the flagship Rezan's Claw. As part of a coup led by Prophet Zul, the ships at Tusk Isle were taken over by mutineers aided by their Kao-Tien mogu allies. Zandalari loyal to King Rastakhan and members of the Horde quickly launched a campaign to reclaim the fleet in the Bay of Kings. After cutting through Zul's followers on the island and dealing with a potent weapon onboard Rezan's Claw, they lit a blue signal flame on the isle's watchtower to mark their victory.[1]

During their war campaign on Zandalar, the Alliance prepared a massive operation targeting the moored fleet. On Tusk Isle and the Isle of Fangs, Alliance agents infiltrated the Zandalari vessels while also secretly planting remote explosives below their hulls.[2] It was planned for these to be detonated as part of an impending assault on Dazar'alor.