From Wowpedia
(Redirected from Twilight Dragonflight)
Jump to: navigation, search

The twilight dragonflight is a dragonflight created by the results of magical experiments carried out by Sintharia upon dragon eggs. Using ancient dragon artifacts and the powers of the nether dragons, Sintharia created a new breed of dragons that feed vampirically on all forms of mystical energy. The first encounter of these dragons with the outside world was by Krasus, Kalec, and the draenei priestess Iridi. Iridi thought of their appearance not as a shadow, but more akin to the day turning to night, like twilight as experienced on Azeroth. She thus dubbed them twilight dragons.[3]

During the third invasion of the Burning Legion, it was discovered that the twilight dragonflight survived, with a mature drake named Zeryxia leading them.[4] While Zeryxia was killed, more twilight dragons were discovered within Grim Batol[5] and elsewhere, as stone troggs unearthed deeper caverns wherein thousands more eggs had been laid.[2] 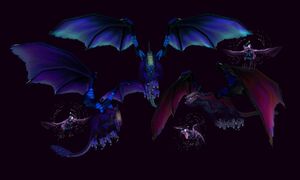 Sintharia's earliest creations proved unstable and were destroyed by Krasus and Kalec. However, they still displayed considerable power, having the ability to vampirically drain magical energy from any source. Sintharia's subsequent creation, Dargonax, proved even more powerful and far more cunning. Dargonax proved too ambitious and strong for Sintharia to completely control, even with fragments of the Demon Soul in her possession. Only the sacrifice of the nether dragon Zzeraku enabled Dargonax to be defeated, and in his death throes he seemingly destroyed Sintharia as well. 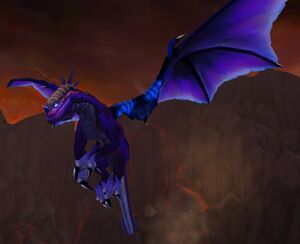 Deathwing's continued absence led many to assume that Sintharia had been acting alone at Grim Batol, but a recently discovered clutch of twilight eggs inside the Chamber of the Aspects has raised fears that Deathwing himself played a role in the creation of the malefic dragons. A powerful guardian, Sartharion, watches over the eggs within the black dragonflight's volcanic chamber, the Obsidian Sanctum. If the rumors of Deathwing's involvement are true, the dark future that he set into motion seems on the verge of plunging Azeroth into a new age of twilight.[6]

With the red dragonflight already committed heavily to battling Malygos and the Scourge, Korialstrasz sent word of the twilight eggs to the Council of Six in Dalaran in the hope that adventurers could be found to deal with the situation. As he had hoped, a band of heroes was deployed in short order, and the twilight eggs were destroyed. The incident went without fanfare, mention, or acknowledgment; and for a time, seemingly without retribution.[7] 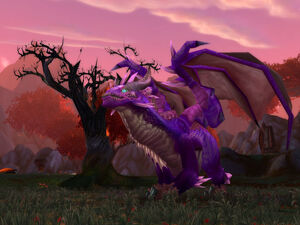 The story of the twilight dragonflight is expanded in World of Warcraft: Cataclysm, in the region known as the Twilight Highlands, east of Grim Batol. What Deathwing has planned for them is yet to be known. They seem to be some kind of an elite guard within Twilight's Hammer clan's ranks and their drakes are seen to be used as mounts by their mortal followers.

It is explained that Twilight dragons are usually raised from stolen eggs from other dragonflights, which are then modified through dark magic. A "natural" egg found in Mount Hyjal revealed that one of their matriarchs, Desperiona, has become a viable broodmother.[8] 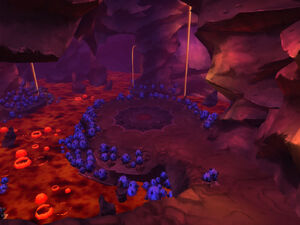 It is further revealed that the Twilight Brood[9] is being created by a reanimated Sintharia in Twilight Caverns under the Bastion of Twilight. After being slain, Sintharia says: "Deathwing, I have fallen, The brood has fallen", which might mean that her death is the end of the Twilight dragonflight.

During the events of the Dragon Soul, Twilight dragonflight is nearly extinct. Though once vast in number, only a few dozen twilight dragons now remain. Astride these hardened survivors are the last vestiges of the Twilight's Hammer's army: the elite drake riders of Deathwing's personal escort. Led by the insidious Warmaster Blackhorn, they move with unholy purpose, driven to protect their dark master.[10]

Though adventurers seemingly brought down these last vestiges of the flight while pursuing Deathwing, and Blackhorn was slain, it's perhaps notable that his mount, Goriona, escaped.

Heroes who proved their might in the gladiatorial arenas during the Cataclysm were awarded the most exceptional of the twilight drake broods.[11]

The twilight dragonflight is reborn and joins the Twilight's Hammer in the Twilight Depths of Deepholm. They were led by the dragon Zeryxia, who answers to Sintharia's whispers from beyond the grave.[12]

During the Fourth War, numerous twilight dragons, drakes, and dragonkin can appear on Island Expeditions, apparently drawn by the Azerite being mined by the Horde and Alliance.[13] An adventurer can bring a

[Battered Twilight Scale] to an agent of the red dragonflight, Eryna, who reveals that the troggs dug too deep and disturbed a previously-unknown massive cache of twilight dragon eggs below Grim Batol. Eryna claims that she can sense thousands of heartbeats below Grim Batol, but she has no idea how many are truly down there, or where other caches might exist.[2] She also saw them coming out of the citadel, being mobilized by someone.[14] 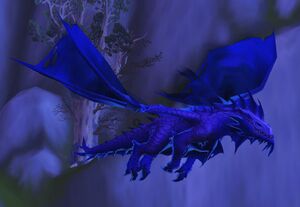 In the Vermillion Redoubt in the Twilight Highlands, Void-twisted twilight dragonkin have surrounded Alexstrasza, but a champion and Kalecgos arrived and helped subdue the invaders. A twilight dragon Vexiona is confronted in front of Grim Batol who before fleeing states "Your pathetic dragonflights will fall. If you will not serve the master, then I will find one who will".[15] Twilight Whelplings re-emerged outside of Grim Batol.

Vexiona, accompanied by Velinaria and Dreliana, leads a band of Darkwhisper cultists in an assault on Blackwing Descent in an attempt to lure in and capture Wrathion, with the hopes of using his essence in a ritual to raise Onyxia and Nefarian as servants of N'Zoth. Not all Twilight Drakes seem to hold their master's favor, as when Wrathion descended into Blackwing Descent, he found a drake, nearly dead from maiming by the Old Gods' forces by their experiments to augment them. This drake later aided the group against their former masters, going as far as to ferry the bearer of the

[Heart of Azeroth] back to the Chamber of the Heart after they had destroyed the remains of Onyxia and Nefarian and forced Vexiona and Dark Inquisitor Xanesh to retreat to Ny'alotha.[16]

The twilight dragonflight has had a fractured past and now has an uncertain future. Vexiona's clutch of eggs was kept in a chamber inside the Carapace of N'Zoth, exposing them to N'Zoth's corruption from a young age and driving them even more mad than other twilight dragons. However, after N'Zoth's defeat, some of them had their minds cleared by Wrathion with the promise that they, and he himself, will find themselves some day, despite their pasts.[17][18]

Sintharia's final words in the Bastion of Twilight could have several different meanings. Most associate them with the fall of the twilight flight. However she is also the last remaining brood mother for the black dragonflight after the death of Obsidia. Additionally the twilight dragonflight is also capable of 'reproducing' via the eggs of other dragonflights, meaning Sintharia's death could mean little for the flight in the long run.