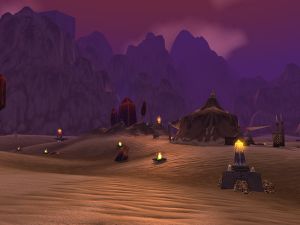 Twilight Outpost before Silithus was destroyed.

The Twilight Outpost is found in the far southwestern corner of Silithus, just northwest of the Scarab Wall and west of the Bronzebeard Encampment. During the Call of the Scarab micro-holiday, creatures scale with the player from level 60 to max level.

The original outpost, alongside the majority of settlements in Silithus, was destroyed at the end of the third invasion of the Burning Legion when Sargeras tried to destroy Azeroth. The few survivors of the Twilight's Hammer would build a new settlement in the same spot, but their leader Michiel Voidstrider was quickly killed before he could rally the cult into action.[1]