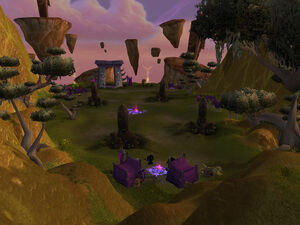 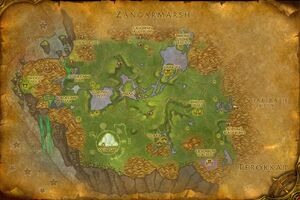 in Outland is the location of one of the four dimensional gateways which Magtheridon used to bring demons from the Twisting Nether under his control. Illidan Stormrage shut down the gateways, which cut off the flow of demons and ended the extra stresses on the remnants of the planet.[1] The gateway still exists; however, it is no longer functional. This area was once the palace-city of Highmaul.

There is a camp of Deathshadow cultists being overseen by Reth'hedron the Subduer, a 73 elite eredar. The Shadow Council has assigned some spellcasters to channel magic into the frame of the portal. It seems that they are trying to re-open it to let more of the Burning Legion through.

Floating nearby on rock fragments are four of the same large statues that stand aside the Dark Portal (robed, hooded, holding a sword). No information about them is known.

The Twilight Ridge is only accessible by flying mount, although the player can discover the area by trekking around the northwestern mountains near Forge Camp: Hate to get to behind the mountains at [18.2, 30.2]

. If the player dies here, he will not resurrect inside the ridge but will resurrect on Northwind Cleft instead.

Locations of other portals: