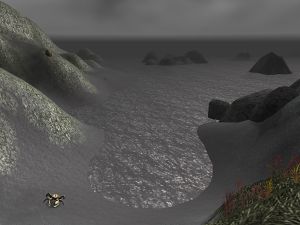 The Twilight Shore is a stretch of coast in southern Darkshore. It lies south of the Long Wash, which ends due west of Ameth'Aran, and runs all the way south to Ashenvale. The Twilight Shore is the most rugged part of Darkshore's coast, and the gray beaches get broken up by jutting cliffs and small islands in the south. Murlocs are abundant here, and the waters bulge with aggressive threshadons who do not hesitate to attack adventurers swimming for shore.

During the Battle for Darkshore, the Darkscale naga took advantage of the turmoil between the Alliance and Horde to invade the Twilight Shore.[1]