For the Inscription-created item, see 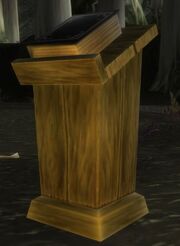 The Twilight Tome is an ancient book used by the Twilight's Hammer in the Darkshore. [38.6, 68.1]

It is written in an ancient language, and illustrated by a master artist. You can't read it as the text twists into grotesque shapes, if you try it. When bringing the

[Insane Scribbles] to Onu he senses the chaotic, primal magic of the old ones in it. Although written by elves, it is heavily cursed and tainted by the corruption of the Twilight's Hammer, but it seems the cult is using ancient elven magic to bring their old masters back to Azeroth.

There are two tomes at the site, only the northern will complete the quest. The one in the south will knock you down with a demonic hand. 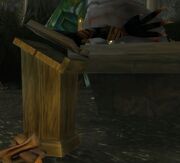 Something defends the book

In Diablo 2, another game by Blizzard, there is a Twilight Tome in the Stony Field that starts a quest to kill the evil Countess.