For the title, see Twilight Vanquisher. 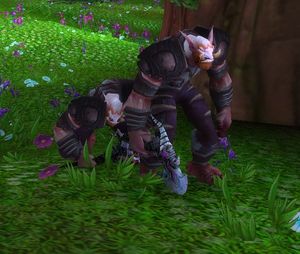 The male troll Vanquisher has a purple skin, which could indicate he is a dark troll, as they inhabited the area of Mount Hyjal. If he was indeed a dark troll, he would be one of the few potential appearances for this race. Other candidates are the Zandalari Infiltrators, who also spawn with a forest troll model with purple skin. The only confirmed dark troll is Speaker Ik'nal, who claims the Twilight's Hammer wiped out her tribe. It is possible the vanquishers could have been converted during this effort.