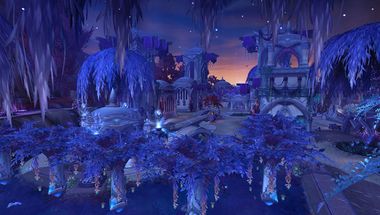 The Twilight Vineyards are a large plantation and arcwine production center in the northeast of the nightborne capital of Suramar City. The vineyard specializes nearly exclusively in the creation of arcwine, an alcoholic beverage imbued with the energies of the Nightwell, and consumed by the entire nightborne population in order to satisfy their addiction to magic. As such, the facility's importance to the city is exceptional, for if a nightborne is starved of the energies provided by the arcwine, they will wither away and begin to lose their very minds.

The vineyards are responsible for the entire process of arcwine production, from the cultivation of the fruits involved to the fermentation of the ingredients to produce the actual alcoholic beverage. The Twilight Vineyards are thus highly extensive in the facilities available on site and employ a very large number of laborers and other specialists to ensure a constant output.

In total, the vineyards housed two primary orchards; the eastern one provided the majority of the fruit for arcwine production, while the westernmost orchard produced an extra sweet fruit to make for a sweeter vintage.[1]

Control of the Twilight Vineyards inevitably bestow immense power; this was used to great extent by Suramar's ruler, Grand Magistrix Elisande at the time of the Nightfallen rebellion in order to keep many of her subjects in line. The intentional rationing of the arcwine produced by the vineyards subsequently led to great suffering among the city's less affluent districts. At the outset of the civil war, the facility was managed by the vintner Margaux, and monitored closely by the Grand Magistrix through Overseer Durant. 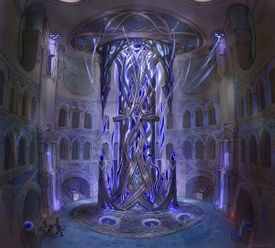 When the city of Suramar was shut off from the world under an arcane shield during the War of the Ancients, the power provided for this massive barrier came from the Nightwell, a font of incredible energy created using the Eye of Aman'Thul. During their 10,000 year-long period of isolation, the nightborne were sustained by the Nightwell, which provided for their entire civilization and allowed it to flourish. This power would come with a price, however. The nightborne dependence on the Nightwell quickly became an addiction, and just as its power could nourish and sustain their people, so too could being cut off from its power cause them to wither and descend into insanity.

In order to deliver the energies of the Nightwell to each of Suramar's multitude of citizens, a method was discovered to imbue this magical power into a simple alcoholic beverage, which would become known as arcwine. Eventually, many variations of arcwine were developed, dependent upon the ingredients used in production, though almost all are based upon manafruit and/or shadowberries. The fruits used in the creation of arcwine are all grown on site, with numerous orchards located around the vineyard.

The picked fruit is then processed in the juicing veranda, where certain ingredients are added as the fruit itself is crushed in a large vat (often by physical force, such as by foot).[2] The juice is then extracted from the vat for the next step.

Though the time required for the juice to ferment would ordinarily be a major obstacle in the way of mass-producing such a product, nightborne vintners are able to bypass this. The Aging Chamber located in the vineyard has been altered using powerful time magic to rapidly speed up the passing of time for everything within it. Thus, casks of would-be-arcwine may be placed within the chamber to drastically shorten the time required for fermentation to fully occur. 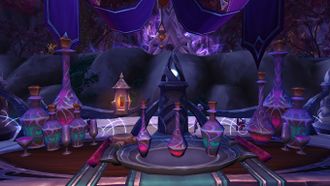 The most important step involves actually imbuing the wine with the Nightwell's power, thereby allowing it to properly feed the addiction of the shal'dorei. An energy vessel was traditionally used to catch delicate falling dewdrops of the energy from the Nightwell (this method allows the catcher to safely manage the essence). The contents of the vessel are then simply poured a cask of unfortified wine, which then is officially termed arcwine. The amount of times the beverage is actually distilled with Nightwell essence has a direct impact on its strength.

Finally, the liquid was sent to the vineyard's bottling facilities, where each bottle is sealed using magic to ensure none of the Nightwell's essence imbued in the arcwine fades, allowing it to last for hundreds of years. At this point, the arcwine is either placed in storage or exported to another part of the city. Additional ingredients were frequently added during production to give specific flavors to the vintage, and have been known to include: walnuts, melon,[3] nightsap, shadefruit, silver jasmine,[4] various berry types, honey, and nectar. This highlights the fact that while the primary use of arcwine was to satiate the nightborne addiction to magic, it also served as a valued recreational drink, in the same way ordinary wine would be.

Though the arcwine produced in the Twilight Vineyards was historically available to virtually all members of nightborne society in some form or another (save those exiled from the city) the most arcwine, as well as that of the finest quality, could only be procured by the rich nobility.

The Twilight Vineyards successfully kept the people of Suramar supplied with arcwine for thousands of years during the millennia-long isolation of the nightborne from the world. At the time the city's arcane shield was lowered, the vintner known as Margaux was in charge of overseeing the vineyard's continued productivity.

Shortly afterward, the Nightfallen rebellion would erupt within nightborne society, with an insurgent faction led by First Arcanist Thalyssra seeking to overthrow the regime of Grand Magistrix Elisande and expel the Burning Legion from Suramar. In response to the unrest, Elisande and her allies adopted the tactic of arcwine rationing, hoping to keep the citizenry obedient. As part of this, the Twilight Vineyards were placed under intense security, with access restricted to specially-approved persons.

Within the vineyards themselves, Duskwatch security treated the facility's workers with notorious cruelty, often abusing them physically if they wavered at all in their grueling labor.[5] Shipments of arcwine coming from the vineyards were heavily guarded, though the flow of product to the Noble District and the Nighthold were not rationed. The artificial shortage of arcwine in Suramar's western districts, where the poorer citizens resided, caused great suffering, though many were saved thanks to the intervention of the Nightfallen resistance who distributed stolen arcwine freely.[6]

In the rebel base of Shal'Aran outside the city, the Nightfallen had carefully been cultivating the growing power of an arcan'dor tree. This tree, however, had recently become endangered by a type of insect. To counteract this, the rebel leaders decided to acquire shadescale flyeaters, native to the Twilight Vineyards, where they were used to keep the orchards pest-free.[7] With the aid of Lady Ly'leth Lunastre, Nightfallen agents prepared to infiltrate the vineyards in disguise to procure some of the creatures.

Margaux is charged with sedition by Overseer Durant

The rebels made contact with the vineyard production manager, Margaux, who remained secretly sympathetic to the Nightfallen cause. The disguised agents were subsequently able to get past the facility's security, acting under the pretense of touring the plantation. After the 'tour' was completed, a rebel agent discreetly took possession of several of the flyeaters and prepared to return to Shal'Aran. Before this could come to pass, however, Overseer Durant with guards abruptly arrived at the vineyard and confronted Margaux. Accusing her of treason, Durant had the vintner summarily executed on the spot by order of the Grand Magistrix.[8]

The overseer then released the Duskwatch on the vineyard to fully secure the location. After slaying many of the Duskwatch, The Nightfallen operative made it back to Shal'Aran with the creatures they were dispatched for. The rebels were outraged by the sudden murder of Margaux, and would set out to exact vengeance. Eventually, they would succeed in assassinating her killer, Overseer Durant.[9]

Even after Margaux's death, the Nightfallen rebels remained active within the Twilight Vineyards, mainly through Sylverin, apprentice to Margaux. They periodically had to procure more shadescale flyeaters for the arcan'dor and also helped keep the infestation of tattered silkwings under control.[10] Rebels secretly even personally helped with the production of arcwine; if the vineyard's production quotas were not met, it would be the ordinary citizens who would suffer most.[11]

A daily shipment was dispatched from the vineyard under heavy guard to the Nighthold for the Grand Magistrix herself. On one occasion, Nightfallen rebels ambushed the convoy led by Spellsinger Quiris just as it was leaving the vineyards and seized the high quality arcwine.[12]

Though the vineyards were left relatively unaffected when the Nightfallen and their allies eventually marched on the city, the insurgents did raid the facility for food and water supplies in preparation for the invasion.[13]

Following the death of the Nightwell and the nightborne joining the Horde, arcwine continues to be produced in the Twilight Vineyards under Vintner Iltheux's oversight, with the nightborne now apparently exporting the wine to other Horde races. Shortly after the end of the Fourth War, Baine Bloodhoof sent assistants—Micah Broadhoof, Boss Mida, Kazit, and Nomi—to the the vineyards in order to speed up the process. However, this ended up having the opposite effect since Iltheux assigned the workers to roles they were completely unsuited for.[14] In the hopes of allowing the vulpera to join the Horde, Meerah and the Horde adventurer traveled to the vineyards and reassigned the workers to new roles,[15] allowing them to resume production and create a new vintage that Iltheux approved of.[16]