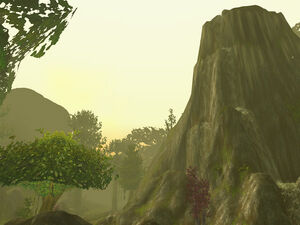 The Twin Colossals (a.k.a. Twin Colossi) are a pair of high vertical mountains, rising up on the west side of Feralas. The road from Feralas to Desolace runs between these two mountains. (Some individuals conjecture that these are the stumps of what were once trees that have since eroded and become indiscernible from the surrounding rock and dirt)

They are one of the most striking landmarks of the area and inspire awe in whoever beholds them.

Gregan Brewspewer witnessed a giant makura named Diamond Head claw its way up the top of the eastern mountain, he can now be found there in a small but deep pond.

Before patch 4.0.3a, the eastern colossal was accessible by the quest

[25] To the Top from Marli Wishrunner, who still resides at the base of the western colossal. Both mountains are only accessible by asking an NPC in the respective Alliance and Horde camps near the bottom of each mountains for a teleport up to the top or with flying mount.

At the top there is a good view of the surrounding area, a small lake where one can fish, and a night elf male, Kalin Windflight, who sells

[Colossal Parachute] which enables the player to safely leave the mountain for 20 silver each.

A massive subzone is named after the twin mountains in the area. It contains most of northwestern Feralas, extending out to the Forgotten Coast.

Within the area, a night elf moonwell that has been corrupted (likely by the Emerald Nightmare) sits northwest of Rage Scar Hold. A rare satyr, Mordei the Earthrender, patrols around it. To the far west, the once hostile Cliff Giants, now friendly, fight Corrupted Cliff Giants.