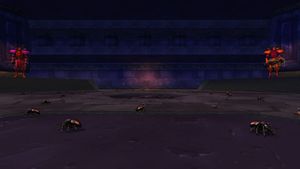 Vek'nilash are known as the Twin Emperors. They rule over the qiraji from the sanctuary of their temple.

In this area, Qiraji Scarabs and Qiraji Scorpions are scattered all around the floor, and if killed, they constantly respawn throughout the fight. They are initially neutral, but turn hostile when hit by any sort of area of effect spell or when mutated by Emperor Vek'nilash.

Emperor Vek'nilash: Swings a big sword, immune to all magical damage (except holy).

Emperor Vek'lor: Caster, immune to all physical damage, has a mana bar. 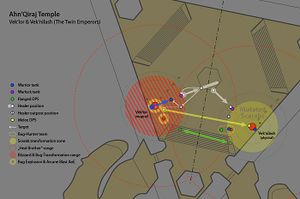 At level 80 this encounter becomes many times easier. If your group is physical damage heavy, your target will be the physical damage dealing Emperor. You must have a physical mortal strike (Arms Warrior, or a Hunter with Aimed Shot talented). Tank the Twins together and just dps them down, burning through their self heals. Any casters can be assigned to dealing with the bugs. A caster tank is recommended, but not necessary. Shadow bolts hit for approx. 5-6k. And on a 25k+ player it is easily healable. An alternate strategy, and one I have not personally tested, is if your group is caster heavy, you will need a rogue who has wound poison attempting to keep the poison (which deals nature damage) on the caster Emperor. Once either of the Emperors die, one of two things will happen. 1: The opposite Emperor also dies. 2: The opposite Emperor is reduced to <10% health. And with no healing, it is very easy to finish him off. To make any headway in this setup, your raid needs more than 15,000 DPS.

Things everyone needs to constantly watch out for: