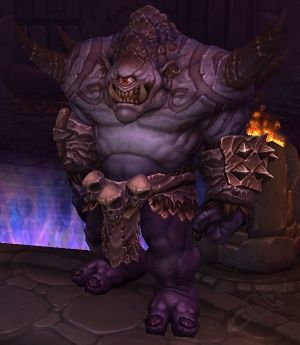 The Twin Ogron, Pol and Phemos, are the fifth boss of Highmaul in Nagrand.

Guarding the entrance to the Gorthenon atop Highmaul, Pol and Phemos are the personal guard of Imperator Mar'gok. Peerless in strength and determination, what these ogron brothers lack in intelligence, they make up for with sheer size and brute force.

Twin Ogres have a shared health pool. At intervals each will cast one of 4 abilities - sometimes two overlapping. Save combat resurrections for tanks and top healers/dps after Quake.

2 tanks (assign one to each boss for entire fight), 4 or 5 healers, rest DPS

This is second easiest boss in Highmaul.