The Twin Peaks is a 10 vs 10 Capture the Flag battleground for players at level 85 and above. Situated in the Twilight Highlands, it depicts the ongoing battle between the Wildhammer dwarves and the Dragonmaw orcs.

The mechanics for Twin Peaks are identical to those for Warsong Gulch; for strategies and further details on this type of battleground, see the Warsong Gulch Overview.

The Twin Peaks are a strategic chokepoint crucial to Horde and Alliance assaults on the Twilight’s Hammer cult and the forces of Deathwing. These craggy mountains are so vital to the war effort that the Dragonmaw clan of orcs and the Wildhammer dwarves remain locked in seemingly endless battle to this day, each hoping to claim definitive ownership of the peaks.[1]

Nestled in the Twilight Highlands, Twin Peaks has flared as a point of contention between the Alliance and Horde. As a 10 vs 10 capture-the-flag battleground, the first faction to capture three flags is victorious. Lend your strength as both factions struggle to take control of this critical high ground! 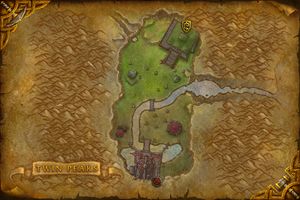 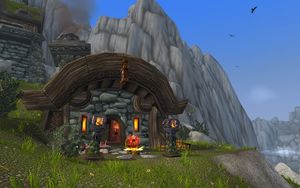 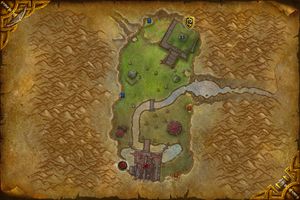 Located within the Twilight Highlands, the Twin Peaks remains a crucial point of high ground for staging effective and debilitating attacks against the black dragonflight and the Twilight's Hammer, who dominate this foreboding environment. And now, two previous occupants of the nearby city of Grim Batol vie once again for control of the peaks' defenses. The Wildhammer clan, architects and original owners of the once-great fortress city, maintains some operations in forested outposts of the highlands. The Wildhammers now call upon heroes of the Alliance to help claim the peaks and fend off the Dragonmaw orcs. The Dragonmaw clan, having spent years working to enslave red dragons, once again provides strategic importance to the Horde. As the Dragonmaw and Wildhammers fight for territory they once called home, the Alliance and Horde carry out the struggle to control the Twin Peaks.[2]

Twin Peaks is a new 10 vs. 10, capture the flag-style battleground. Much like in Warsong Gulch, players must work to dominate variable terrain, infiltrate the enemy base, and steal the enemy flag, returning it to their fortress while remaining in control of their own flag. The first faction to capture three enemy flags before time expires will win the battle. If the game ends in a tie, the team that capped the last flag will win. If neither side caps a flag, the game will end in a draw, equal to a loss for both sides.

Those who seek to control Twin Peaks will face an intense battle. The lands surrounding this ever-troubled location are key strategic strongholds of Deathwing and all of his followers. The Twilight Highlands are as rich with history as they are fraught with disaster and tragedy. Will the Dragonmaw clan, reinforced by Garrosh's Horde, take control? Or will it be the Wildhammer dwarves, reunited with their Ironforge brethren and accepted into the Alliance, who seize the peaks? 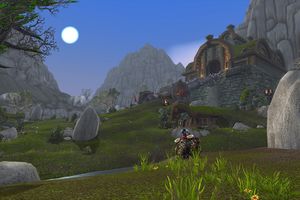 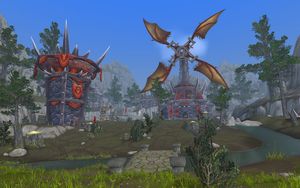 Although the Wildhammer and Dragonmaw bases are virtually identical, the terrain surrounding each base is not. Players will need to work to control an asymmetrical field where the mountain peaks are divided by a valley river. A single bridge over the river serves as a choke point in the center of the map; although deep, the river can be crossed. On either side of the river sits an outpost where temporary character enhancements can be claimed. In addition, tree stumps and rocks throughout the valley create strategic points for you to use line of sight to your advantage. To prevent absolute domination by one faction through its control of the enemy graveyard, the Horde and Alliance players resurrected in Twin Peaks will spawn from one of two graveyards per faction.

Wildhammer Stronghold serves as the Alliance base in the north, hovering above the valley, atop a series of plateaus. With three entrances to the complex, players have two primary means of reaching the longhouse: scaling the plateaus to the northwest, or using the stairwell up the middle in order to access any of the three openings. Be careful, though, falling or being knocked off the cliff can not only cause damage, but it can also hinder a successful offensive against or defense of the base.

Dragonmaw Forge acts as the Horde base in the south, sitting over a body of water into which the valley's river feeds. With three entrances to the compound, players have a few means of getting inside. One entrance on the southeast side requires riding up an incline and crossing a knee-deep river. A second entrance is through a water pipeline leading from the surrounding lake, while the main entrance can be accessed via a bridge over the waterfront. You'll want to be aware of your surroundings when you use the main entrance, though, because players can be knocked down into the water, slowing their advance or crippling their defense.