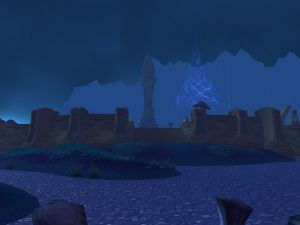 Twin Spire Ruins are the remains of a holy draenei site in Zangarmarsh now contested by the Alliance and Horde. Two towers flank a burial ground, with the towers being capturable. When both towers are captured by a faction, their battle standards are carried forth and placed in the graveyard, giving complete control. Despite the name, the ruins contain only one ruined tower in the center. The "twin spires" are two small buildings that are not spire-like.

The towers (Blizzard calls them "Beacons") use the standard capture system seen throughout the game (in such places as the Eastern Plaguelands and in Terokkar Forest). A bar is shown when inside the tower, with the pointer moving toward whichever faction has the most players within the tower. 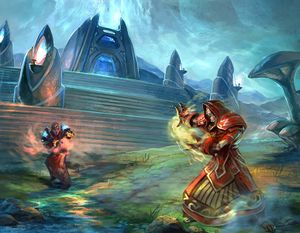 When both towers are under your factions control, the Field Scout of your respective faction (Alliance, Horde) will hand out a Battle Standard, which can then be placed in the graveyard (Blizzard calls this the "Central Tower"), capturing it for your faction. When Burning Crusade was first released, mounting caused the flag to be released. This restriction has since been lifted. Aspect of the Pack and other speed enhancing skills, including a druid's ground-based shape-shifts, will not cause you to lose the flag either. 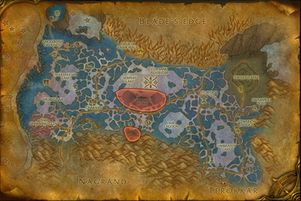 The Twin Spire Ruins, and some of the surrounding area, are a draenei archaeology dig site.

On the alternate Draenor, the Twin Spire Ruins were meant to be lighthouses among the Zangar Sea.[1]