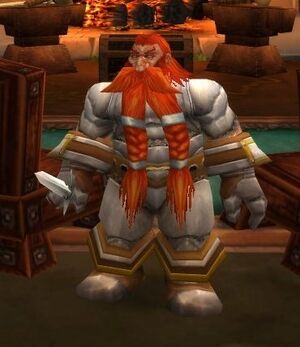 Twinbraid was a dwarven warrior of the Alliance. He first appeared as General Twinbraid representing Ironforge and Bael'dun. He was later promoted to the head general of Lion's Landing as High Marshal Twinbraid during the Alliance's campaign in Pandaria.

In Classic, General Twinbraid is situated in Bael'dun Keep, at Bael Modan in the southern Barrens as a level 36.

Prior to the events of the game, after the forces of the Bael'dun group occupied tauren territories and began their disruptive excavation operations, they drove out the Stonespire tribe, displacing or killing many innocent tauren.[1][2] As a commander, Twinbraid was presumably the one who ordered the attack on the tauren tribe.

[Tear of the Moons] had been found. Mad Feegly then asked the Horde adventurers to retrieve the tear contained in General Twinbraid's Strongbox.[3]

The general was now found at Twinbraid's Patrol, accompanied by several bodyguards. He was a staunch ally to the Alliance when they launched their invasion campaign of the Southern Barrens with the intent of creating a military supply chain between Theramore and night elf territory.

An Alliance adventurer found the corpse of Weezil Slipshadow, a Bilgewater Cartel goblin, in the ruins of Bael'dun Keep. Concluding that the Cartel was responsible for his people being massacred at Bael Modan, Twinbraid sent the adventurer to exterminate every goblin worker they could find in Frazzlecraz Motherlode in order to teach them what it means to be a part of the Horde.[7][8] Afterwards, he had his agent blow up the mine there to have the goblins suffer like his people, burying them alive in their lode,[9] and to prevent the Horde from having its resources.[10] Following General Hawthorne's death, General Twinbraid took command of the Alliance armies in Fort Triumph.[11]

In Horde questing of the Southern Barrens storyline, it is revealed that Gann Stonespire, a tauren who parted ways with the Horde to seek vengeance against the dwarves for all the damage they had done and the destruction of Camp Taurajo, and Horde player,[12] were behind the destruction of Bael'dun Keep;[13] Weezil had agreed to aid Gann in his cause.[14]

For his service in the Southern Barrens campaign, Twinbraid was promoted to High Marshal and became the head general of Lion's Landing in Pandaria. According to his journal, Twinbraid claimed that stopping the Horde would save the lives of innocent young pandaren from dying by Horde violence as his son did, and so he was hunting Warlord Bloodhilt whom he mistakenly blamed for the death of his son. He also relished his a chance at vengeance against the Horde.

During the Lion's Landing scenario, the Horde attacked the base and Twinbraid, Taylor, the SI:7 rescue team, and Alliance adventurers successfully repelled the Horde invasion. Later on Wrathion sends Horde heroes to kill Twinbraid in