Mekgineer Twizzleflux the Insane is an elite level 84 leper gnome in steam armor located at Starwatch Tower on top a cliff east of the Lost City of Tol'vir. He holds the access codes to the Expedition's Crawler Vehicle. A small group of Expedition Members can be found gathered in front of him. Twizzleflux will turn them into Cursed Expedition Members when approached.

Twizzleflux was in charge of a large expedition into Uldum. When he and his men dug too deep into a cursed tomb, they were afflicted by a terrible curse that has robbed them of their sanity and taken control of their minds. Somehow able to contain the curse within his suit of armor, he is now able to curse more gnomes that arrive as requested.

The members of his forces are as such:

The expedition also used Unstable Bomb Bots and the M.A.C. Diver alongside several submarines, which were harbored at the Cursed Landing. 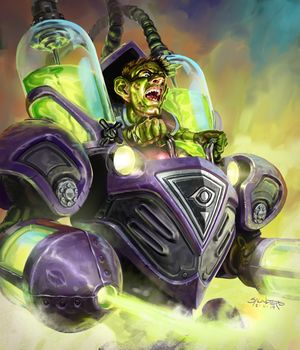 Twizzleflux as a member of the League of E.V.I.L. in Hearthstone.

Having joined the League of E.V.I.L., Twizzleflux appears as one of the bosses that can be encountered in the Tombs of Terror adventure in the Saviors of Uldum expansion for Hearthstone.