Not to be confused with Tyr's Fall.

Tyr's Hand is a fortified human city and was one of the last holdouts of the living against the Scourge in the region. Located in the southeast of the Eastern Plaguelands, its surroundings are in a much better condition than the rest of the Plaguelands, although the trees and other flora are decaying.

Long affiliated with the Scarlet Crusade, after the Cataclysm, every Crusader within Tyr's Hand turned into undead. Subsequently, the Brotherhood of the Light defeated the undead forces within Tyr's Hand and took control of the city.[1][2]

Tyr's Hand lies on the coast of Tyr's Bay, within the area originally known as the Eastweald. It is one of the oldest and most revered holy sites of the Church of the Light.[3] Because of its religious significance, Tyr's Hand is also known as a "city of churches."[4] It is home to both the Scarlet Basilica and the fortified Tyr's Hand Abbey. The latter consists of three sections: the main hall, the hall of arms and the library wing.

It is a heavily fortified city, able to hold its own against the Scourge. Its most important military structure are the barracks. It also has its own blacksmith.

After the Troll Wars and King Thoradin's reign of Arathor, many humans expanded the nation settling in the northern lands of Lordaeron, formerly ruled by the Amani forest trolls. These humans populated the Eastweald some 2,700 years before the Dark Portal and founded new Arathi settlements.[5]

The Church of the Holy Light, with its origins tracing back to the chaos of the Troll Wars, was founded some centuries later in Lordaeron. It became a predominant human religion and the church constructed temples and shrines throughout the human lands. Among the oldest and most revered of these holy sites were the temples in the Eastweald, including Tyr's Hand.[3] The region eventually fell under the sway of the Kingdom of Lordaeron and became a center of trade and commerce with the nearby high elven kingdom of Quel'Thalas.[6]

During the Second War, troubles arose in Tyr's Hand when the local peasant population fell into a state of minor revolt. The Alliance was forced to fight the rebellious peasants. Eventually, the uprising was quelled and the Knights of the Silver Hand were summoned to watch over the populace.[7] It was later discovered that the rebellion was started by Alterac spies in hopes of concealing the orcish mining facility located in the region.[8]

Eventually, the Horde used ogre magi to attack the area, establishing a fortress on an island at the mouth of Tyr's Bay, hoping to cut off the Alliance supply lines into Quel'Thalas. The city suffered heavy damage as the orcs razed the bayside area.[6]

During the Third War, as the Eastweald was captured by the Scourge and turned into the Plaguelands, Tyr's Hand held on. Under the rule of Lord Valdelmar, the fortified city withstood almost daily attacks by the undead. Eventually, it allied itself with the Knights of the Silver Hand. The knights extended their protection to the city, while also hoping to recruit additional personnel from there.[9] As the Order of the Silver Hand splintered, the city allied itself with the Scarlet Crusade. 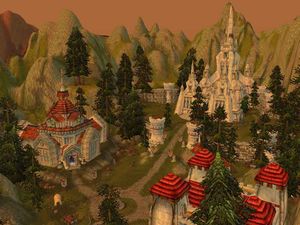 Tyr's Hand prior to Wrath of the Lich King.

The city was controlled by Crusader Lord Valdelmar and the Scarlet Crusade, holding out against the Scourge dominating the Eastern Plaguelands. It sent supplies[10] and reinforcements[11] to other Scarlet locations. Daily reports were sent here from Stratholme via heavily escorted couriers who had to fight their way through the Plaguelands.[12]

Prominent Scarlet Crusade members here included High General Brigitte Abbendis, as well as the Scarlet Oracle, Demetria. The latter was eventually lured out of the city by the Horde and ambushed on her way towards Stratholme.[13] Blood Knights were sent here to steal a vial of the abbey's holy water in their quest to attain the Thalassian Charger.[14] Adventurers also entered the city to loot a Brilliant Sword of Zealotry.[15]

In a battle near Tyr's Hand, the Crusaders utilized the artifact weapon Light's Wrath to great effect, defeating a Scourge army outnumbering them twenty to one.[16]

Tyr's Hand was the center of the holdout area known as the Scarlet Enclave,[17] also encompassing Havenshire and New Avalon. The area came under attack by the Scourge necropolis, Acherus. Although High General Brigitte Abbendis initially organized the resistance, and a relief force from Hearthglen and Tirisfal was sent towards the city,[18] Abbendis was eventually influenced by false visions of the Light[19] and Scourge deception[20] to abandon the area. She sailed away with some of her followers to Northrend, forming the Scarlet Onslaught. The relief army led by Galvar Pureblood was decisively defeated by the Lich King and his death knights.[21]

Although most of the Scarlet Enclave was ruined by the Scourge, Tyr's Hand endured under the leadership of Lord Valdelmar. Among the survivors was the High General's daughter,[22] Lynnia. Acherus eventually defected to the Knights of the Ebon Blade, who focused their efforts on destroying the Lich King in Northrend.

As one of the last human holdouts in the area, the city was eventually able to collect many of the relics of Lordaeron. These included the

[Gavinrad's Sigil] and others, which were mostly kept within the barracks.[23]

Every Crusader within the city was turned into undeath, presumably due to the machinations of the dreadlord Balnazzar posing as the Grand Crusader Dathrohan.[24] As a result, the Brotherhood of the Light sent an assault force of one hundred men to the area.[25] Aided by adventurers, the Brotherhood was able to capture the city and eliminate the Scarlet leadership including the then undead Valdelmar himself.[2] With this, the Scarlet Crusade definitely lost its hold over the city,[26] which came under the control of the Brotherhood of the Light.[1]

The city is named after the keeper Tyr. He lost his hand in a fight with the massive proto-dragon, Galakrond, and had a new, silver hand forged to him by the watcher Jotun instead.[27] Tyr eventually found his death while fighting the C'Thrax Zakajz the Corruptor, and was buried within the area now known as the Tirisfal Glades. He entered the legends of the humans, and his name is carried on by both the city of Tyr's Hand and the nearby Tyr's Bay.[28] 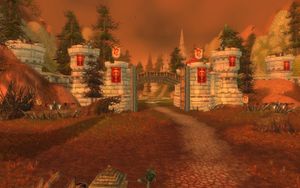 Tyr's Hand serves as the Scarlet Crusade's main base of operations.[29] The city is manned by an army of Scarlet Crusaders and is untouched by the undead plague. Located in the southeastern Plaguelands, Tyr's Hand is the only human settlement left in this part of Lordaeron. In the city's center is the newly erected Scarlet Monastery, a grand edifice that rivals Stormwind's Cathedral of Light. General Abbendis commands the city and its Crusaders and priests. The few humans who roam the Plaguelands desperately seek the safety of Tyr's Hand.[30]

Tyr's Hand is very near to the border of the Hinterlands, which may help explain why that city remains relatively safe.[31]