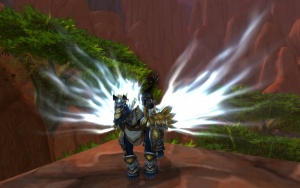 Tyrael's Charger was a mount obtained by signing up for the WoW Annual Pass,[1] which was available until April 30, 2012. During the time to obtain the mount, the player must have signed up for the Annual Pass and maintain a year subscription with World of Warcraft to qualify for the mount.[2]

For a short time on December 20, 2017, the mount was available for purchase through the Taiwanese Battle.net website before being disabled.[3] The purchase button re-appeared on the web page the evening of December 21, 2017 but making it only available to Korean and Taiwan regions. Blizzard made this mount available in Korean and Taiwan was because those regions never received an Annual Pass to obtain the mount.[2]

A symbol of justice throughout all known realms.

This regal and trusty companion of the Archangel of Justice is in need of a new master. Summon the angelic steed from the High Heavens of the Diablo universe and charge into battle against the forces of darkness.

A letter from The WoW Dev Team 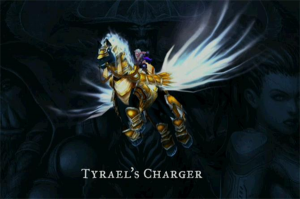 Players received Tyrael's Charger attached to a letter from The WoW Dev Team:

I had this thing delivered clear from outer space and my feet don't even reach the stirrups.

Perhaps you might get some use out of it...?