Tyranis Malem is a night elf.

Tyranis is a noble of the Darnassian merchant family, House Malem.[1] He had a keen interest in the arcane during his days among his fellow night elves. Tempted by the magic that he studied, and having been scorned by his comrades for his practices, Tyranis set off for the Desolace with his sister, Dalinda.[2] He had heard that there were demons there which he could study. He was waylaid by warlocks, who shared his vision, and he ended up joining them instead. He could be found in Thunder Axe Fortress. 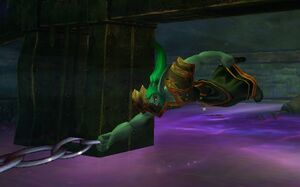 He eventually became the last disciple of Nagaz of the Shadow Council. While they were in search of the Eye of Dalaran in Tol Barad, he found himself dangling on the end of a chain, trying to hold on to avoid getting sucked in a Void hole. An undercover champion of the Black Harvest broke the chain, and Tyranis was sucked into the Void.[3]

Main article: An Eye for a Scepter#Stage 3: The Third One