Tyrathan Khort is a human hunter in the Alliance army, but not especially high ranking. He was found by Chen Stormstout after being injured in battle and brought to the Shado-pan Monastery to heal, where the Shado-pan had him care for the recovering Vol'jin so their opposite personalities would achieve balance. Tyrathan was haunted by doubt after losing his scouting squad to a sha attack in the Jade Forest. He and Vol'jin eventually become friends, even making a pact to kill whomever killed the other.

As a boy, Tyrathan was inspired to become a hunter by the legends of the Unseen Path.[1] The Khort family has long served the Vanyst family of Stormwind nobles, a tradition which Tyrathan continued. Tyrathan met his wife when he was hunting a pack of wolves, but as time went on his wife grew to worry about how easily killing came to Tyrathan. He feels that while he was away as a soldier, that perhaps his wife and Morelan Vanyst have grown close.

Tyrathan served in Daelin Proudmoore's forces that occupied Theramore shortly after the Third War and during that time he met the troll leader, Vol'jin. At some point in the past he spent time in Stranglethorn Vale and learned how to speak Zandali from his troll guide Keren'dal. He speaks Zandali with a Stranglethorn accent.

Tyrathan's superior, Bolten Vanyst, had him lead a squad of scouts to Serpent's Heart and report back within three hours. The team was ambushed by sha, which killed all the hunters and their pets, including Tyrathan's friend Larsi. Tyrathan was the only survivor, though with a broken leg, and dragged himself through the forest feeding on whatever plants he could find until he was found by Chen Stormstout and brought to the Shado-pan Monastery.

Tyrathan was tasked by the Shado-Pan to tend to Vol'jin, who was also recovering at the Monastery after being betrayed by the Horde. Despite nearly being polar opposites, Tyrathan and Vol'jin slowly became friends as they had similar near-death experiences in Pandaria. They eventually even make a pact to kill whoever kills the other. The two of them worked together to defend Zouchin Village from Zandalari forces led by Khal'ak. Tyrathan and Chen would also face a group of Zandalari scouts in the wilds of Kun-Lai Summit.

When Tyrathan, Chen, Vol'jin, and a squad of Shado-Pan entered the Vale of Eternal Blossoms to stop the revival of Warlord Kao, all but Vol'jin were captured by the Zandalari and brought to the Isle of Thunder. Despite Vol'jin seemingly leaving them to join the Zandalari, Vol'jin saved Tyrathan and the others and they left the island. Returning to Kun-Lai, Tyrathan helped defend the Shado-Pan Monastery against a Zandalari attack as part of The Thirty-three.

Though mortally wounded by a mogu spear in the battle, Vol'jin called upon Bwonsamdi to return his spirit. Bwonsamdi agreed, given the large number of Zandalari souls the pair had delivered to him through the battle, but promised that he would not let Tyrathan go forever. Following this Tyrathan told Vol'jin that he planned to recover before going back home to his wife and children, remarking that he needed to tell his wife that he understood and that his children need to know him.[2] 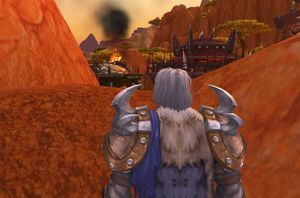 Tyrathan secretly arrived at the funeral ceremony of Vol'jin in the Dranosh'ar Blockade in Durotar after his death. He watched it from afar. When approached by the Horde adventurer, he reveals that they were good friends and that he is going to avenge him.

Tyrathan can also be found at the Trueshot Lodge in Highmountain, where he comments that he is thinking about lost friends.

Please don't call the guards. I came to honor Vol'jin, not to cause trouble.

He was a friend. We fought side by side against great odds. I owe that troll my life.

We once swore to each other that, should one of us be killed, the other would avenge him. Always thought he'd outlive me...

Whatever it takes, I'm going to make good on my promise.

Trueshot Lodge
As a boy, I heard legends of the Unseen Path. They made me want to become a hunter. When I heard the order had been restored, I had to see it with my own eyes.

Is something troubling you?

Thinking of lost friends... and a promise I need to keep.