Tyson Sanders is the first encounter at Rank 4 in the Brawler's Guild.

Tyson himself does not have any abilities, but he frequently summons three chickens: the Electrochicken which summons a void zone, an Explosive Chicken that explodes, and a Well Fed Chicken that hits harder the longer it's still alive.

Wander around the room, dodging chickens and focusing on Tyson. Try to use splash damage to kill the well fed chickens, as moving about will avoid damage from the explosive and electrochickens.

Sanders' 911,070 health means he needs 7,600 DPS at minimum to beat the encounter, plus more for dealing with the chickens. 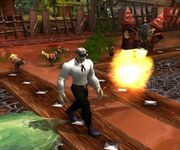 Tyson and his chickens.

Intro
<Announcer> yells: He may be a huge chicken, but he'll still put up a fight. It's Tyson Sanders!
Tyson Sanders yells: Cock-a-doodle-DIE!
Summon chickens

Tyson Sanders is a reference to both Colonel Sanders (founder of KFC) and Tyson Foods.