Uldaman is an old, earthen complex buried deep within mountains of Khaz Modan. Prior to the Third War,[1] it was partially excavated by the dwarves from Ironforge, but has since fallen into the hands of the troggs and Dark Irons, who find the place ideal to dig for earthly riches. It was previously a titan-forged facility.

Uldaman is located in the Badlands, west of the entrance to Loch Modan. The enemy level range is 35 to 40, and the minimum level required to enter it is 35.

Uldaman before it was buried.

Uldaman is an ancient Titan vault that has laid buried deep within the earth since the world's creation. Dwarven excavations have recently penetrated this forgotten city, releasing the Titans' first failed creations: the Troggs. Legends say that the Titans created troggs from stone. When they deemed the experiment a failure, the Titans locked the troggs away and tried again - resulting in the creation of the dwarven race. The secrets of the dwarves' creation are recorded on the fabled Discs of Norgannon - massive Titan artifacts that lie at the very bottom of the ancient city. Recently, the Dark Iron dwarves have launched a series of incursions into Uldaman, hoping to claim the discs for their fiery master, Ragnaros. However, protecting the buried city are several guardians - giant constructs of living stone that crush any hapless intruders they find. The Discs themselves are guarded by a massive, sapient Stonekeeper called Archaedas. Some rumors even suggest that the dwarves' stone-skinned ancestors, the earthen, still dwell deep within the city's hidden recesses.

Uldaman is located in the northern part of the Badlands. 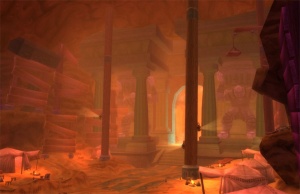 The main entrance into Uldaman. 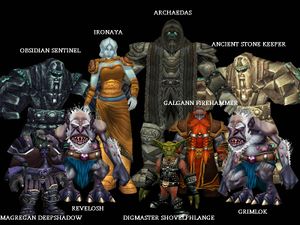 Uldaman is a famous dig site hiding ancient Titan relics and remnants. It has produced many important finds, and more undoubtedly wait within its depths. Ironforge's entire population is eager to see what's down there. Unfortunately, the site is currently inhabited by Stonevault troggs who were buried for millennia inside the ruins. Ironforge prospectors uncovered the ruins and inadvertently set the troggs loose upon Khaz Modan.[3]

The layout of Uldaman on the floor, and the use of a staff, created from a medallion and a shaft, to create a beam to show the opening to a hidden chamber, are most likely a reference to Indiana Jones and the Raiders of the Lost Ark; more specifically, to the map chamber that showed the way to the Well of Souls, where the Ark of the Covenant was held in the film. Like Tanis in the film, which was buried under the sand in a sandstorm that lasted a whole year, Uldaman was buried beneath the earth (presumably due to The Sundering and is being excavated for its powerful contents. The Explorer's League/The Reliquary are likely representative of Indy and his cohorts, and the Dark Iron dwarf excavators are likely representing the Nazis, as they are the less savory group.