For the greater complex of which this dungeon is a part, see Ulduar.

Ulduar is a raid dungeon in the titan complex of Ulduar which is located in the Storm Peaks. It serves as the prison of the Old God Yogg-Saron[1] as well as the current residence of most of the titanic watchers who have fallen under its influence.

Ulduar was implemented in patch 3.1.0, intended to be one grade in difficulty above Naxxramas.[1][2][3]

Ulduar received good reception from the players who praised the instance's interior design, music, interesting and challenging boss encounters and the rich amount of lore. It is regarded by many to be the greatest and most successful raid instance Blizzard has so far released. 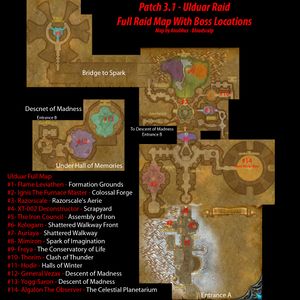 A composite map of Ulduar (except Alagon's level).

Ten of the raid dungeon's fourteen encounters have hard modes (different from normal and heroic modes).[4] Algalon the Observer is a hard mode-only but optional encounter. Encounters completed on hard modes reward achievements as well as extra and/or improved item rewards.[1][5] Siege vehicles play a role in the dungeon's first encounter, Flame Leviathan.[1]

The dungeon does not follow a completely linear progression; Yogg-Saron and Algalon the Observer are regarded as the most difficult encounters, and are accessible independent of each other.