For the subzone in Tanaris, see Ruins of Uldum. For the Lesser Vision of N'Zoth version, see Vision of the Twisting Sands.

“As with Uldaman and Ulduar, Uldum houses one of only a few of the known titan constructions, the existence of which predates that of mortal life on Azeroth. For years historians have explored southern Kalimdor for a means of entry into this ancient titan land, searching for more evidence of Azeroth's origins. But the Cataclysm will change everything, for the facade behind which Uldum has been tucked for millennia will be ruptured, leaving powerful mysteries vulnerable to discovery by the bravest, smartest, or perhaps even most brutal explorers.”

Uldum (pronounced: [ˌuːlˈduːm]) is an ancient desert located on the southern coast of Kalimdor, surrounded by the Un'Goro Crater in the north, Tanaris in the east and Silithus in the northwest. It is the homeland of stone-cat people known as tol'vir and is rich with titan lore.

A superweapon is rumored to exist in Uldum which the Alliance, Horde and Deathwing's minions seek. There is no super weapon, however; Uldum is the weapon, intended to wipe out all life on Azeroth in case Algalon the Observer's Reply-Code Omega went through to the titans.[2] 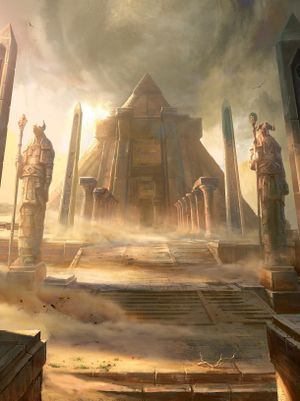 The titan-forged stronghold of Uldum, the Halls of Origination. 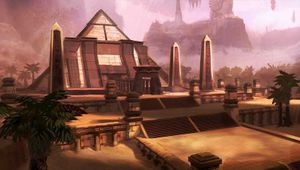 The region of Uldum was once a vast jungle, dotted with pristine lakes and waterfalls.[3] During the ordering of Azeroth, Highkeeper Ra and his followers — the anubisaths, the tol'vir and the mogu — installed the Forge of Origination in Uldum. The Forge would regulate the rhythms of the earth and fortify the world-soul's form, but would also be able to completely reoriginate the planet in case of systemic corruption. After installing the Forge, Ra assigned some of the tol'vir and anubisaths to watch over the region, while he and the rest of his followers continued west to establish the prison of Ahn'Qiraj to house the defeated Old God C'Thun.[4]

Centuries later, Ra was imprisoned by Lei Shen, the Thunder King, who used the Highkeeper's powers to become the first emperor of the mogu empire. Learning from Ra of the demise of the Pantheon, Lei Shen declared that he would carry on the work of the titans and led an army of his mogu warriors and Zandalari allies into Uldum, seeking to claim the Forge of Origination — believing it to hold the secrets of eternal life. The tol'vir knew they could not defeat the Thunder King and his armies in battle, and so instead turned to another tactic. While some of the tol'vir remained outside the fortress to hold off the invading armies, the ones inside activated the Forge. They knew that using the weapon to its full potential would wipe out all life on the planet, and so instead had configured it to only scour the nearby land. Waves of energy erupted from the Forge, bathing the surrounding lands in the powers of uncreation and instantly killing Lei Shen and his entire army; however, it also devastated the surrounding lands, turning Uldum into a barren desert. The surviving tol'vir then worked to ensure that no one would ever attempt to claim Uldum again, and shrouded the mountain passes leading into the region with magic, sealing the land off from the eyes of mortals.[3] The illusion remained for many thousands of years until the Cataclysm damaged the ancient titan device that separated Uldum from neighboring Tanaris.

Long ago, the tol'vir weaponsmith Irmaat was known all throughout Uldum for his excellent work in creating magical weapons that represent the air spirits that live there.[5] The city of Ahmtul was destroyed by raw elemental fury when Irmaat tried to bind the power of Al'Akir the Windlord within a set of fist weapons.

After the death of Al'Akir in the Cataclysm, the djinn Typhinius recovered the fist weapons and took control of the air elementals. When the Burning Legion invaded, Typhinus commanded his air minions to raid Uldum, the Fists of the Heavens sweeping away all early resistance. However, as it turned out, the air elementals still did not recover from their prior civil war and were weakened, and Typhinus had not properly mastered them. Soon, the attack on Uldum ended.[6]

Sargeras striking Azeroth with his sword unearthed new tombs, and from one the Amathet emerged. They speak little to other tol'vir, believing them to be betrayers of their sacred duties. They believe that they, stewards of the titans, should alone control the Azerite. When they realized that Rajh and his kin were slain, they constructed their own new keepers, which means they must have an active forge like the Forge of Wills and Forge of Origination.[7] The Amathet tol'vir later began to assault the Halls of Origination and surrounding areas of Uldum, bringing them in conflict with the Ramkahen. The Ramkahen formed the Uldum Accord by allying with the Explorers' League and Wastewander bandits. They defended Uldum and the Halls of Origination from both N'Zoth's forces and the Amathet. 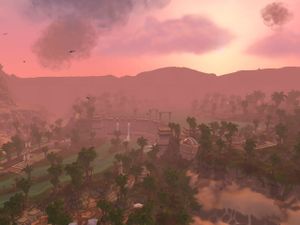 The city of Ramkahen and the surrounding areas by the sunset.

Uldum is a research facility for the titans in their continuing efforts to enhance the biosphere of Azeroth. Specific information regarding their work as it relates to Uldum is unknown and can only be accessed with the Plates of Uldum.[8]

Prospector Gunstan maintained a lonely vigil near the outside gates on behalf of the Explorers' League. Since then, he has been joined by a number of his fellow explorers, with the rival blood elven Reliquary setting up camp nearby.

The landscape of Uldum is predominately desert, with a large river surrounded by an oasis flowing through the center of the region, mostly populated by the tol'vir, with the largest settlement - the Lost City located on the river delta. The western part of Uldum consists of a large expanse of the wind-swept dunes with half-buried Tol'vir settlements and pyramids, caused by the recent transgressions of Al'Akir's air elemental minions. In the east lies a massive pyramid that houses the titan complex known as the Halls of Origination. The northwestern part is the location of the Obelisk of the Stars and The Gate of Unending Cycles connecting the region with Tanaris desert. The southern part of the region besides the river delta is mostly cliffs, with settlements held by the Neferset. The southwestern part is being held by an expedition led by Commander Schnottz. The Cataclysm also brought the Skywall towers into Uldum that serve as an entrance to the Al'Akir's domain - the elemental plane of air. Al'Akir sends his elemental minions to convince the Tol'vir to join his new liege Deathwing, even rewarding them with removal of the Curse of Flesh. Those who dared to oppose suffered dire consequences as exampled in the Orsis settlement.

The animals that live there are scorpids, hyenas, camels and more. Notable animals include the large scorpion himself, Madexx. 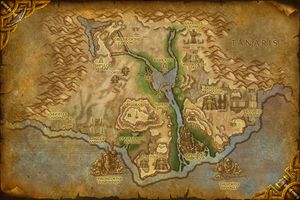 Map of Uldum after The Coffer of Promise.

Map of Uldum before The Coffer of Promise. 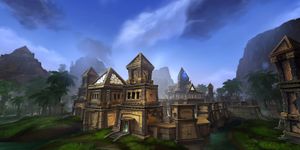 The Lost City of the Tol'vir.

1 Only when the zone is being assaulted by N'zoth. 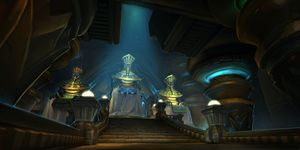 The Halls of Origination. 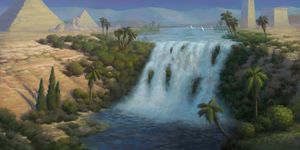 Flight paths from Oasis of Vir'sar

There are portals to Uldum from the earthshrines in Stormwind and Orgrimmar. They unlock after players wind up in Ramkahen after completing the first few mandatory quests starting with

[83] Easy Money from Adarrah in Tanaris.

There are no portals from Uldum back to Stormwind/Orgrimmar, however. 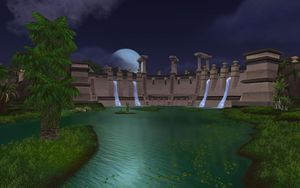 The Vir'naal Dam at night.

The fauna of Uldum is not widely known to the outsiders because of the long-timed isolation of the region from the outside world.[citation needed]

Mysteries in the Sands

I'm not a prophet; I'm just a gnome who trusts her gut. After the first small tremors started shaking Azeroth, my instincts told me that something even bigger was on its way. Unfortunately, no one else in Gadgetzan shared my healthy paranoia of the coming apocalypse. The old codgers in the just snickered behind my back when I decided to live in the skies over Tanaris aboard my trusty frying machine, only coming down for food and fuel when absolutely necessary. When the "big one" finally hit as I'd predicted, they weren't laughing anymore.

As the dunes around Gadgetzan rose and fell in the waves, all those skeptics were crying like babies while I was safe and sound high in the sky. But I didn't expect what happened next: just over the mountains in southern Tanaris, land appeared out of thin air. Not just land, but some kind of civilization with towering obelisks and pyramids covered in strange symbols. A thought ran through my head that this might be the legendary region of Uldum. I wrote the idea off as harebrained until dozen of would-be adventurers started showing up in Gadgetzan, whispering Uldum's name and babbling on about treasure hoards hidden with the area.

With all these fresh faces around, I've been making a fortune selling aerial tours over the mountains near Uldum. More importantly, those disbelievers who treated me like a nut before the quake hit have begun show me the respect I deserve. If they keep it up, I might just offer them one of my tours...maybe even at a discount!

It is said that Tanaris once housed a Titan city, a place known as Uldum. The city seems to be lost as no one has been able to find it. Perhaps the sands cover it, or maybe Uldum is just another name for the Caverns of Time.[10]

Gadgetzan, a goblin trading post in Tanaris, is where many Ironforge prospectors stock up on supplies before heading out in search of the lost Titan city of Uldum.[11] Fragments of notes unearthed from Bael Modan suggest that a great titan city lies deep within the rocky expanse of the southern desert. So far, dwarven expeditions have yet to track down the location of Uldum, but they are confident that it is only a matter of time.[12]