Ulthalesh, the Deadwind Harvester is the artifact used by affliction warlocks in World of Warcraft: Legion.

The scythe was created by Sargeras from the fires of Mardum's destruction, and he used it to harvest the souls of the demons who had risen up against him. He named the scythe after the dreadlord Ulthalesh who led those demons and who was the last of the demons who the scythe devoured. Over the centuries, Sargeras bestowed the blade upon many, only to see their spirits devoured by Ulthalesh.

Sargeras gave Ulthalesh to Sataiel and commanded her to go to Azeroth where she brought ruination to what would later be known as Deadwind Pass and formed a magical nexus. As Sataiel was scheming against Sargeras, he sent visions to the Guardian of Tirisfal Scavell of the danger. Scavell hunted down Sataiel and, after an epic battle, turned the scythe on her. He hid it where no one would find it.

When Sargeras twisted Guardian Medivh's mind he dispatched the cursed Dark Riders to search for the scythe. The Dark Riders continued their quest even after Medivh's death and they eventually found it and brought it to the catacombs beneath Karazhan.[1] From there it was recovered by a warlock champion of the Council of the Black Harvest with whom it served against the Legion.[2]

The first necrolyte to walk the world of Azeroth, Sataiel, was given this scythe by the titan Sargeras himself. It grows in power as it draws souls from its victims. The Harvester earned its name as Sataiel methodically drained all life from the hapless inhabitants of Deadwind Pass, creating a potent magical nexus there in the process. Hunting down Sataiel, the Guardian of Tirisfal turned the scythe on her, sending her soul to join those of her victims. Eventually the Dark Riders recovered the weapon and secreted it beneath the tower of Karazhan.[3] 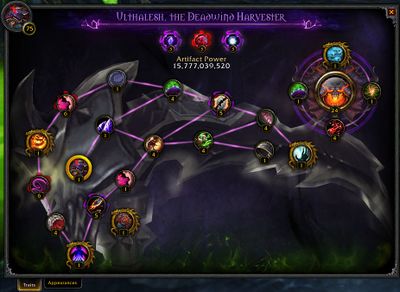 Upgraded: Hand of the Afflicted

Challenging: Spine of the Condemned