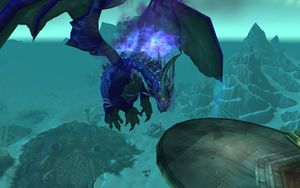 Ultraxion is the fifth boss to appear in the Dragon Soul raid.[1] He is so monstrous that he cannot land atop Wyrmrest Temple, so players must stand on the ledge and battle him as he flies next to the temple. The damage in the fight is reminiscent of Patchwerk in Naxxramas with just ridiculous amounts of damage; a gear check boss. However, while Patchwerk was a simple tank and spank, Ultraxion has mechanics which can tax the coordination abilities of the raid.

More an abomination of dark energy than a dragon, Ultraxion has spent his short life absorbing the essence of captured nether dragons. Ultraxion is the only twilight dragon Deathwing has praised, and his arrogance is overshadowed only by the crackling energies surging through his twisted form. Loyal to his master, Ultraxion swears to bring about the fall of Wyrmrest Temple.

After 6 minutes have passed, Ultraxion will cast Twilight Eruption, a 5 second cast that will instantly wipe the raid.

Ultraxion is a DPS and healing race, requiring the group to handle a tank-swapping mechanic while doing high DPS to the boss and surviving constant AoE damage and the Hour of Twilight effect.

The fight takes place in the Twilight Realm, and players must be in the realm to do damage to Ultraxion. The Heroic Will ability, which appears on a big purple button in the center of the screen, allows players to escape the realm for several seconds. Using this ability properly is the key to surviving the fight.

All players need to be aware of the Hour of Twilight cast, which comes about once a minute (45 seconds on normal). One person (or three in 25-man) must remain in the twilight realm or the raid will instantly wipe; the other players must use their Heroic Will button to escape the twilight realm and avoid the damage.

Tanks must use damage reduction cooldowns to survive the Hour of Twilight - note the Last Defender of Azeroth buff which doubles the power and halves the cooldowns of these abilities. Tanks must also manage the Fading Light debuff. The current tank will receive the Fading Light debuff at some point; when he is about to die, the offtank must taunt Ultraxion and the current tank must use Heroic Will to survive Fading Light. After the Heroic Will ends, that tank will generate no threat for 5 seconds; he must then watch the offtank until the next Fading Light, and taunt to pick Ultraxion back up.

Healers need to heal the AoE damage from Unstable Monstrosity, which is split among the entire raid. The cast rate for this AoE gets faster every minute the fight goes on, starting at once per six seconds and peaking at one tick per second for the last minute before the enrage at six minutes. Throughout the fight, Alexstrasza, Ysera, and Kalecgos will provide assistance in the form of buffs for the healers, Each of these buffs can only be given to one healer at a time, so decide wisely who should get them. Normally the red buff is best used on Holy Priests (Renew, Prayer of Healing, HW:Sanc) and Druids (Wild Growth, Rejuv, Lifebloom), the green buff for Holy Paladins (Divine Light) and Shamans (Greater Healing Wave), and the blue buff for Shamans (Chain Heal spam), Disc Priests (Prayer of Healing spam) and Paladins (Holy Radiance spam), though depending on the healers different combinations might work just as well.

If you have lag you are somewhat doomed.

For difficulty levels other than LFR, a certain number of players must remain in the twilight realm during Hour of Twilight (and be exposed to massive damage) to avoid a wipe.

In 10-man normal the default tactic is to have the tanks take turns because Last Defender of Azeroth guarantees that every properly-specced tank has an appropriate 90-second survival cooldown. Optimizations are possible (such as a DK with

[Anti-Magic Shell] eating all of the Hour of Twilight).

For 25-man or heroic this means that some non-tank players who can survive a 300,000 point hit must remain in the twilight realm and absorb the Hour of Twilight.

[Anti-Magic Shell]. Consult the following chart to help you choose a rotation:

The following abilities can be used by non-tanks to survive Hour of Twilight casts.

[Hand of Sacrifice], while raid cooldowns that can allow players to survive include the T13 4-piece tank bonuses (Vampiric Brood and Shield Fortress),

[Power Word: Barrier]. Depending on your raid composition, multiple cooldowns may need to be stacked to ensure every player's survival.

[Shamanistic Rage], and destruction warlocks with

[Glyph of Soul Link] and

[Nether Protection] are not necessarily able to eat an Hour of Twilight without assistance, but have excellent mitigation abilities and hence are excellent candidates for staying out with help from the above cooldowns.

The Heroic Will effect can be bound to the "Extra Action" keybinding. If you use an addon that changes your interface, this may prevent trouble with the button. An alternative to permanently assigning a key binding is to create a macro of

and load it onto your action bars for the fight.

Soloing Ultraxion is a challenging DPS race because you must kill Ultraxion before the first Hour of Twilight. Use all your DPS cooldowns immediately and kill the boss as quickly as possible.

Intro
Ysera says: I sense a great disturbance in the balance approaching. The chaos of it burns my mind!
Ultraxion yells: I am the beginning of the end...the shadow which blots out the sun...the bell which tolls your doom...
Ultraxion yells: For this moment ALONE was I made. Look upon your death, mortals, and despair!

Aggro
Now is the Hour of Twilight!

Last Defender of Azeroth
Thrall yells: Strength of the Earth, hear my call! Shield them in this dark hour, the last defenders of Azeroth!

Hour of Twilight
The final shred of light fades, and with it, your pitiful mortal existence!

More Unstable
Through the pain and fire my hatred burns!

Essence of Dreams
Ysera yells: In dreams, we may overcome any obstacle.

Source of Magic
Kalecgos yells: Winds of the arcane be at their backs, and refresh them in this hour of darkness!

Timeloop
Nozdormu yells: The cycle of time brings an end to all things.

Casting Twilight Eruption
I WILL DRAG YOU WITH ME INTO FLAME AND DARKNESS!

Aspects Killed
Alexstrasza says: They have failed us sister.
Ysera says: I have awakened only to sleep once again.

Outro
Alexstrasza says: It is done. Our power now resides within the Dragon Soul. Our fate lies with you, Earth Warder.
Thrall says: Taretha...Cairne...Aggra...I will not fail you. I will not fail this world!

It is possible Ultraxion was originally meant to be Chromatus, possibly because animating a chimaera-like being turned out too hard for the developers. Chromatus just disappeared from the story, and Ultraxion drops a chromatic drake mount. It could also explain why the Twilight's Hammer was present in the Eye of Eternity, as Chromatus was originally imprisoned in an Arcane Prison, technology of the Blue dragonflight.