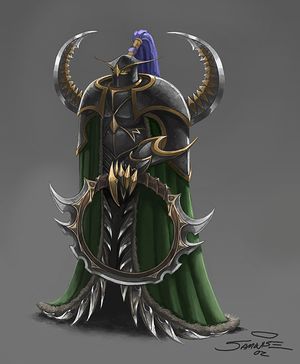 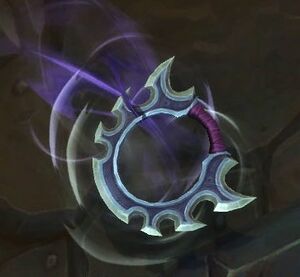 Umbra Crescents are glaives[1][2] and the signature weapons of night elf Watchers. The crescents are deadly but cannot be normally tossed.[3]

While these blades cannot be obtained for player use, one can be found as a common archaeology artifact.

It requires 45 Night Elf Archaeology Fragments to solve. Up to two

[Highborne Scroll] Keystones may be used to aid in solving this artifact.

This is a circular blade favored by night elf Watchers. This type of weapon was most famously wielded by Maiev Shadowsong, but can be seen even today on night elves such as the Barrow Deeps Watchers on Mount Hyjal. It is likely the weapon you have recovered was magical before it was broken into so many fragments.

This weapon was first named in the RPG book Shadows & Light. Magic & Mayhem, which came out earlier that year, called it a Warden's Moon Sword.

Specially chosen wardens wield these circular slashing blades. The serrated, hoop-shaped moon sword is a deadly weapon for both subduing and executing a warden's quarry.

The warden can stamp the name of the person she is quarrying on the blade's handle: in this way, the Moon Sword will show the direction in which the warden's prey is, and will grant to the warden the ability to recognize her target regardless of disguises or attempts to conceal his identity with magic. The warden will also be immediately aware if her target dies while his name is on the blade's handle.[4]

This odd weapon is a moon sword - a curved night elf blade that forms an almost complete circle. The umbra crescent's dark length is covered in mystic Kaldorei runes that glint with silver luminance.