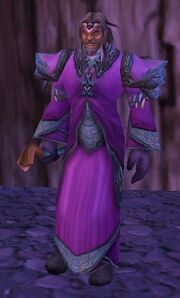 Umbranse the Spiritspeaker is a human male who lives out in the snowy hills of Winterspring. He can be found in a small building northeast of Everlook in a camp he shares with Chal Fairwind of the Wintersaber Trainers. Before the Cataclysm, he gave the book

[Studies in Spirit Speaking] to Gregor Greystone of the Argent Dawn.[1]

The quest chain that started with defeating the Shade of Eranikus ended abruptly with Umbranse.

He was described as a medium[1] and can speak with the dead.[2]

For years it remained unknown what Umbranse did with the Essence of Eranikus. Following the Shattering, Umbranse moved to take over Mazthoril,[3] and it was revealed that he had been collecting magical artifacts such as dragon essences and the

[Crystal of Zin-Malor] to increase his own power.[4]