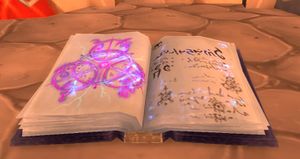 Umbric's research notes on the powers of the void.

Drathir's quest for power led him to seek the fragments of an ancient world, one teetering on the brink of the void itself.

His notes said it existed within a rift in the very fabric of reality. He never found this place... but I have succeeded where he failed. The way will soon be open to us!

Drathir believed this site held an ancient object of unspeakable might. Perhaps this will be the key that allows us to gain control over the shadows.