The Uncrowned is a secret organization of rogues who claim to be "the slayers of kings, the downfall of empires, the unseen blades that write the true history of this world."[1] Their leaders, the Shadows, form the Council of Shadows.[2][3] The Uncrowned fight the Burning Legion alongside the other class orders during the demons' third invasion, and their order hall is the secret Hall of Shadows located in the sewers of Dalaran. Some members of the Uncrowned include members of Ravenholdt, SI:7, and the Bloodsail Buccaneers. 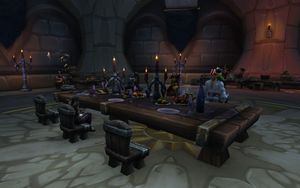 The Council of Shadows are the leaders of the Uncrowned.[2][3]