Under the Burning Sky (WC3 Undead)

Under the Burning Sky is Chapter 8 of the Warcraft III: Reign of Chaos undead campaign, Path of the Damned.

One hour later, on a hill overlooking Dalaran... 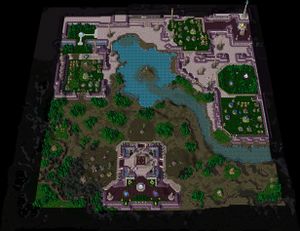 (Several Archmagi and other units appear on this map for the opening cinematic who are later removed when the mission begins.)

Having successfully stolen the Book of Medivh from Dalaran, Arthas and Kel'Thuzad retreated back to their base where they prepared to summon Archimonde into the world. As everything was ready, Kel'Thuzad flipped through the book, marvelling with amazement at Medivh's knowledge, musing that the Last Guardian was more powerful than he thought. Tichondrius appeared, sneered that Medivh's power had not been enough to save him from death and ordered the Summoning to commence. Kel'Thuzad began the ritual, leaving Arthas in charge of the defenses.

Determined to stop the Scourge, the Kirin Tor and their allies launched a massive assault against the undead base. Arthas was ready for them. His scouts had discovered a stockpile of goblin land mines which he used to bolster his defenses. As the Summoning progressed, the barriers between Azeroth and the Twisting Nether weakened, allowing the Burning Legion to send their demonic Felhounds and Infernals to assist the undead. The forces of the Scourge and the Legion held the wizards and their knights at bay long enough for Kel'Thuzad to finish the Summoning. Finally, Archimonde entered the world. "Tremble Mortals and despair!" he bellowed, "Doom has come to this world!" The remaining wizards fled at the sight of the Defiler.

Archimonde congratulated Kel'Thuzad on a job well done. Tichondrius appeared again and welcomed his master. Archimonde's first act was to relieve the Lich King of command and turn the Scourge over to the Dreadlords. Tichondrius was quite pleased by this order. Archimonde declared that before he launched the Legion's invasion, he would make an example of the wizards by obliterating the city of Dalaran. The demons then headed off, leaving Arthas and Kel'Thuzad behind.

Arthas was outraged over this turn of events. "What happens to us now?!" he demanded. Kel'Thuzad told him to be patient, as the Lich King had foreseen all this and had more plans for Arthas.

The hour of Archimonde's arrival has come! You must defend Kel'Thuzad as he chants the volatile, intricate spell of summoning.

Your scouts have discovered a cache of Goblin Land Mines. The crafty devices may be useful when strategically placed for base defense.

The various forces of Dalaran prepare for battle. Meanwhile, at the Scourge base...

Arthas: The circle of power has been prepared per your instructions, lich. Are you ready to begin the summoning?

Kel'Thuzad: Nearly. I've been reading through Medivh's spellbook. His knowledge of demons alone is staggering. I suspect that he was far more powerful than anyone ever realized.
Tichondrius teleports in.

Tichondrius: Not powerful enough to escape death, that is for certain. Suffice to say, the work he began, we will finish... today. Let the summoning commence!
Kel'Thuzad enters the Circle of Power and begins channeling.

Necromancer: Lord Arthas, our scouts have found a cache of goblin land mines!

Arthas: Excellent! We will make good use of them.

Finishing the summoning, Kel'Thuzad moves away from the center of the plateau. The center begins to glow green.

Kel'Thuzad: Come forth, Lord Archimonde! Enter this world and let us bask in your power!
The center begins to burn, and several flames around it shoot up as Archimonde appears.

Archimonde: Tremble, mortals, and despair! Doom has come to this world!
Archimonde turns around, facing Kel'Thuzad.

Tichondrius: Lord Archimonde, all the preparations have been made.

Archimonde: Very well, Tichondrius. Since the Lich King is of no further use to me, you dreadlords will now command the Scourge.

Tichondrius: As you wish, Lord Archimonde.

Archimonde: Soon, I will order the invasion to begin. But first, I will make an example of these paltry wizards... by crushing their city into the ashes of history.
Archimonde makes a flash of magic with his hand, as if to emphasize his point, and runs away to begin the destruction of Dalaran. Tichondrius follows him.

Arthas: This has got to be a joke! What happens to us now?

Kel'Thuzad: Be patient, young death knight. The Lich King foresaw this as well. You may yet have a part to play in his grand design.