"The Underhold" redirects here. For the raid achievement, see 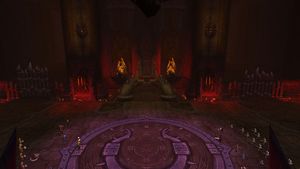 The Underhold[1] is a massive underground compound deep below Orgrimmar and is accessed through an elevator within the Ragefire Chasm. It was used by Warchief Garrosh Hellscream and his Kor'kron as the True Horde headquarters. It contained some of the True Horde's most dangerous machinery and top-secret operations known only to the high ranking members loyal to the Warchief himself.

Following the siege, the Underhold was unused until the invasion of the Burning Legion, where Vol'jin opened the halls to provide shelter for those who were affected by the Legion.[2]

At some point later, Sylvanas Windrunner progressively converted the area into a military installation as Garrosh had, using it to train her elite soldiers and build Azerite weapons. The area that was once the Kor'kron Barracks was repurposed and divided into two sections. One was run by the Bilgewater Cartel, where the goblins tested weaponry fueled by Azerite, which included advanced mechs. The other one was used by the Forsaken, who trained dark rangers and continued to produce the Blight. Baine Bloodhoof was imprisoned in the Underhold Nexus and was later rescued by Horde and Alliance forces.[2] 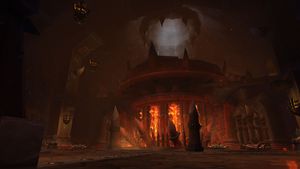