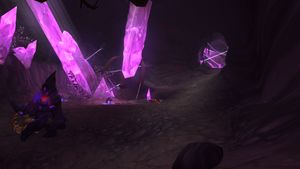 The Underpale is a cavern below Nagrand populated by the exiled pale orcs.

Note: The following applies to the main universe version of the Underpale

They reveled in the powers of the Void that leaked from the injured naaru K'ure, and through the Void they communed with the void lords that sought to bring about an end to all existence. Rumors of the pale orcs' actions in the Underpale eventually reached the interest of Gul'dan and his demon master, Kil'jaeden. In an effort to strengthen the Horde, Gul'dan sent his apprentice Cho'gall to the Underpale to force their mystic powers into powering the Horde's war effort. The ogre mage expected a fight in the Underpale, but found none. The Pale did not resist his intrusion for they were eager to share their prophecy of doom: the Hour of Twilight. Cho'gall had little interest in their prophecy but was very interested in their unfamiliar shadow magic. To win the Pale over, Cho'gall used their beliefs to his advantage and formed the Twilight's Hammer clan where they could serve as both agents of the apocalypse and the Horde under his command.[1]