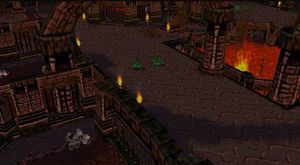 The Underworld Minions were minions of a naga sea witch Zar'jira on and below one or more of the Darkspear islands near the Maelstrom. Thrall, his warriors, and a group of humans were captured by them during Third War.[1]

The bulk of the Underworld Minions consisted of a group of various murlocs who inhabited a huge cave below the surface. A troll explained to Thrall that the murlocs were once peaceful, but had recently begun to capture the trolls for sacrifices. Apparently, if the sacrifices were not met, the Sea Witch would destroy the island.[2] The murlocs' society was highly organized compared to other murlocs, including buildings that made fighting units, heroes, and attack tower buildings. They seemed to have a high tolerance for heat, as their hero was fire-enchanted and their cave home was burning with fire and lava. The Murloc Sorcerer seemed to be their leader, next after the Sea Witch.

They captured members of the Horde, Darkspear tribe, and Kul Tiras Marines. Thrall managed to break out and free the Horde and Darkspear prisoners. The Kul Tiras prisoners attempted a breakout but fell under the massive numbers of murlocs and other creatures. Thrall was too late to help Sen'jin, who was killed by the Murloc Sorcerer. Enraged, Thrall and his troops destroyed both the sorcerer and his forces. The Underworld Minions also failed in preventing Thrall and his allies from escaping the island. Thrall was, however, unable to kill the Sea Witch.