Unholy Axes are animated runeblades that can be found in Naxxramas.

A giant frontal cleave and whirlwind that hits mail armor for ~2200. The cleave has a large depth to it (was hitting people far behind the warrior tanking it). They also will use sweeping strikes, which hit for melee damage as well (roughly 2200 on mail as well).

Simply position it facing away from the rest of the raid, like any normal mob that cleaves or has a frontal cone AE. 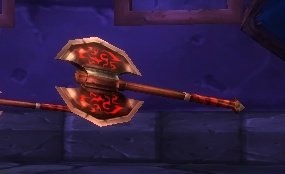 There are three types of unholy weapon in Naxxramas, Unholy Axes, Unholy Swords, and Unholy Staves. The swords and axes have melee abilities, the staves have spell abilities.