Not to be confused with Horned Horse. 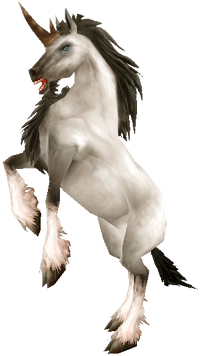 A unicorn in Hearthstone.

A unicorn is a type of courser native to Azeroth, resembling a horse with a horn growing from its forehead. The Quel'dorei steed are descended from a fine line of horses that once grazed near the shores of the Well of Eternity.[1] Many unicorns live on the Broken Isles. The majority of the nightborne refer to zhevras as "monohorns" instead of "unicorns", claiming that it is a much more fitting name, though there is debate among their community. They consider them a rare breed, their distinctive hides being used for all manner of fashion, including hats, coat linings, and other fine apparel.[2] At least some unicorns are tied to the Emerald Dream. Dreamrunners, for instance, are capable of traveling between Azeroth and the Emerald Dream at will.[3] Ephemeral Runners are ghostly unicorns living on the world of Bonich.

Cloudrunners are unicorns native to the Shadowlands.

Broken Isles unicorns are tamable by hunters as part of the courser family. They were originally made tamable as stags in patch 8.1.0 but were reclassified with the release of patch 9.0.1.

Other appearances and mentions

A unicorn in Azsuna.