An unidentified ogre slaver was a leader of the Gorian Empire. 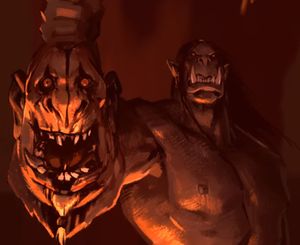 The ogre was a cruel slaver who enjoyed watching his prisoners fighting to the death. To each of his slaves, he would give them a chance of freedom in exchange for a hundred kills. One of these prisoners was Kargath, who would manage to gain the request. However, the slaver would betray him and Kargath was thrown under the arena.

With the others trapped underneath, Kargath would tear off his own arm and replace it with a weapon. Giving the same option to the ones with him, they would do the same.

Arising to the top of the area, Kargath would personally behead the slaver and announced the birth of his clan.[1]