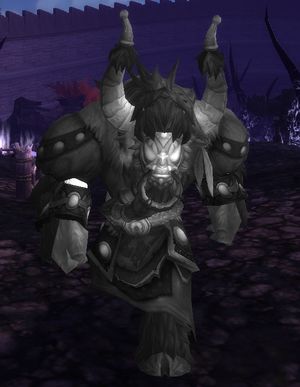 Simply killing Kobai will accomplish nothing, as he is possessed by a particularly powerful and destructive Sha - Malevolent Fury.

You will use the trap I have fashioned from the Blinding Rage Essences you brought. Lure him into the trap, and then steal his mask. Once you put it on, Malevolent Fury will appear and attempt to take control of you.

Defeat him, and we will have made a victory of this tragic situation. You can find him to the north of the retreat, where he taunts us in insane rage.

I should feel many things, but must not allow myself to. Until our struggle with the sha is complete, we must maintain total control of our emotions.

Head northeast to find Kobai. Don't simply kill him—drop the trap on the ground in front of him and drag Kobai onto it, then click on the bonus action button to steal his mask.

Malevolent Fury is a level 87 sha with 429,000 health and the following abilities: