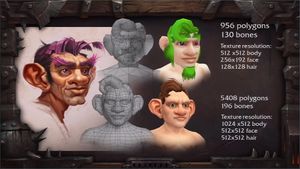 Some details on the changes

With Warlords of Draenor, Classic Warcraft races sport higher detail, updated animations, and new visuals that reflect the soul of their original models: teeth, bones, beards, 'hawks, and all. Look ready for action. Be ready for action.[1]

One of the major features of Warlords of Draenor, the revamp initially updated all player character races introduced prior to Cataclysm except for the blood elves, which were revamped with patch 6.1.0. Revamped goblin and worgen models were announced at BlizzCon 2018 and subsequently released with patch 8.2.5.

Following the main revamps, small adjustments have occasionally been made to the new models.

As we’ve released new World of Warcraft content and expansions, we’ve received feedback that some of the earlier player character models and animations are no longer measuring up to the quality of the newer races. Because Warlords of Draenor takes players back to the homeland of the orcs—one of WoW's original playable races—it felt like a great time to update not just the orcs, but other playable races that could use a refresh.

We know that many of you already strongly identify with the look of your current character, so we’re dedicating a lot of time and resources to make sure these updates capture each race’s iconic identity and personality. We’re still in the process of determining which races will be available upon the expansion’s release, but our goal is to update all eight of the original World of Warcraft playable races, along with the draenei and blood elves, over the course of the expansion launch and subsequent content updates.

Following are images of each race, as previewed prior to their final implementation in patch 6.0.2, with the blood elf models being implemented in patch 6.1.0 while goblin and worgen models were added in patch 8.2.5. Note that not all of the below preview images match the final implementation. These preview images were released during the development of the models. Representing a work in progress, the models often varied over time, rendering earlier images out of date. For videos and further images, as well as comparison to the older models, see here and here.

Prior to the player character revamp, the idea of overhauling player character models had been widely discussed. Plans to overhaul the models were confirmed in late 2011, leading to much speculation and concern from players. However, it was not until November 2013 that the first new models would be revealed, and then only a few. The other models were slowly revealed over the course of 2014, with all models except the blood elves completed by October of that year, in time for implementation in patch 6.0.2. Over this time almost all of the models were previewed to players in the Artcraft blog series, and many underwent significant revisions, both in response to player feedback, and due to being "works in progress".

The revamp saw extensive concern and complaint from players at the prospect of having the appearance of their much-loved characters changed so drastically, and with no guarantees that they would like the results. It was not until many months after the revamp was announced that it was revealed in alpha screenshots that an option existed to use the old models instead of the new ones, allowing players some recourse if they found the new models to be entirely unpalatable. Nonetheless complaint continued regarding the changes, especially as Blizzard continued to state that they had no plans to offer a free re-customization for characters after the new models had been introduced.[6] While appearances could be changed through the paid Appearance Change service, many players felt it was only fair to allow players to re-customize their faces for free following the revamp, especially as many of the faces did not correspond particularly closely to the face they would be replacing. It was not until September, around a month before the models were implemented, that it was revealed that Warlords would see players able to adjust their faces in the barbershop, something that had not previously been possible.[7]

It was initially planned to update the models over the full course of the expansion, with races being updated one at a time. However, the developers were able to complete their work more quickly than expected, enabling them to implement updated models for almost all pre-Cataclysm races prior to the expansion's launch,[8] except for the blood elves, the developers having announced some months earlier that these would not be ready at launch.[9] After having been available on the expansion's alpha and beta servers, as well as later the PTR realm, the finished models were finally implemented in the live game in patch 6.0.2, October 14 2014.

To a lesser extent, the updating of player models is an ongoing one. Patch 6.1.0 brought further adjustments to those new models already implemented, including significant changes to faces, such as adjusting facial 'bones' to re-sculpt faces, and reducing the substantial bags under the female gnome's eyes.

As players learned in the BlizzCon 2011 World of Warcraft Art Panel, the male pandaren has 10 times the number of digital "bones" possessed by the game's older races, allowing them an unprecedented number of fluid and dynamic animations. Players have been asking for updates to older races, and developers have confirmed that they are in the works and being actively designed by the character artists. However, they don't want to put something in the game that feels like a betrayal to a character that you've had for years, so they're proceeding carefully.[11]

We recognize the issue with old models wearing shiny new gear and questing in brand new or updated zones, and even though we have mentioned this before, it can do no harm to repeat that this is definitely on the list of things we would like to do. Bringing the original models up to par with the newer models is something that we are giving some thought.

Nothing has been set in stone yet, but even though it is fairly safe to say that we won't see any changes done to the proportions of the original models, it is a possibility that the detail levels will be improved with additional polygons and such over time... perhaps we may even see some new and updated skins and textures as well :-)

Art Director Chris Robinson spoke on this just moments ago at the BlizzCon Open Q&A panel. It was in reply to an attendee who brought up that, in the art panel, it was explained that the pandaren model has 10 times the bone structures of the classic races, allowing for many more facial animations.

To paraphrase his statement -- which isn't too different from what I've said here on the forums before -- we absolutely plan on updating the existing models. As Chris mentioned, we want to make sure we preserve the look and feel of the original models players have come to know and love, while vastly improving their model and animation quality to be more in-line with the newer races.

We're not going to hide behind the statement that too many players will get mad if we tamper with their models, but it's a concern -- not a concern that's going to stop us from doing it, however. I want to stress as well that it's a massive undertaking to go back and do this. And to a lot of people it's something that won't be considered shiny new content. But not only do we hear the masses of players calling for this update, we really feel it's time to bring them up to par with newer models as well.

The game continues to age, but as we have no plans of slowing down on development any time in the near future, we want to keep updating and polishing it to stand the test of time (again, without sacrificing the look and feel which has brought players in over the years).[12]

It does look quite nice indeed :-)

I guess that our updated NPC models can kind of look like sneaky previews of new character models, but I doubt that this is actually the case.[13]

You know, once there's beards swinging around and ponytails, and they've actually got fingers now, so when they do the point emotes they actually [point]. So we have to animate that now, 'cause we didn't do it before 'cause the hand was like a glove, right?
So we've actually spent a lot of time, we review them, in those weekly art sessions, looking at them side by side, here's the old dwarf and here's the new dwarf, and running the animation and trying to make sure that they have the same emotion. I think if we can capture that emotion in the animations, that people will feel like it's OK, it just looks better.