For the lore of the zone and its status after Warlords of Draenor, see Upper Blackrock Spire.

The instance is a raid with 10 player cap. After patch 4.0.3a it was updated to be a 5-man dungeon. Before patch 3.0.8 the raid required completion of the quest

[60D] Seal of Ascension, to acquire the

[Seal of Ascension]. After the patch this was no longer needed, as the door that lead to Upper Blackrock Spire was now permanently open.

To enter the Upper Spire, use the same raid entrance as the Lower Spire and follow the left wall as you enter. You will ascend a small flight of stairs and into a hall with smaller side chambers. Each chamber is filled with mobs and a small glowing rune. Defeating the mobs in a chamber will deactivate a rune and once each has faded, a double door at the back of the hall will open.

These quests were removed from the game even before the dungeon was overhauled in Warlords of Draenor. 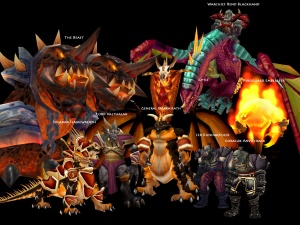