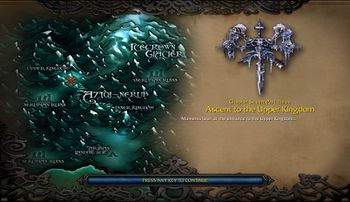 The Upper Kingdom in Warcraft III.

The Upper Kingdom is one of the sections of Azjol-Nerub. The Azjol-Nerub instance takes place here.[1]

In their way to Icecrown Glacier to help the Lich King, Arthas Menethil and Anub'arak had to cross the Upper Kingdom in order to reach the surface. Once they go out of the Old Kingdom, the ceiling collapsed caused by unexpected quakes and Arthas got trapped in one of the rooms. To get out, he had to get beyond various nerubian traps and fight some faceless ones. In the meantime, Anub'arak managed to get through by tunneling. The two encountered later and fought their way out into Icecrown.[2]

Anub'arak was fought and killed in this section of Azjol-Nerub.

The Upper Kingdom was the area seen during the mission "Ascent to the Upper Kingdom". It encompassed the sections of Azjol-Nerub stretching from the area beyond the fight with the forgotten one in "The Forgotten Ones", to the Azjol-Nerub entrance to Icecrown Glacier.

Here in the shattered kingdom of Azjol-Nerub, pillars of ice pierce the land like the teeth of an enormous beast. Perhaps recruiting an ally from the native inhabitants would be wise. Note that this map was obviously above ground, whatever that may imply.

The Upper Kingdom is one of the two sections of Azjol-Nerub, the other being the Old Kingdom. This area includes more recent structures, built when the nerubians grew too numerous to stay below. The War of the Spider was fought through here, and so much of this area was destroyed. The Scourge now occupies this level. Although they reopened damaged passages and cleared rubble-filled tunnels, they did not bother to repair the many statues, friezes and murals that were ruined.[3]

Judging by its location, Naz'anak: The Forgotten Depths and the Icy Depths are probably a part of the Upper Kingdom.