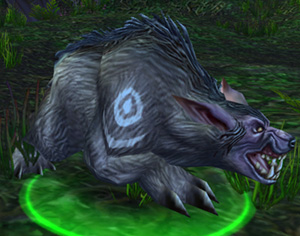 Ursangous is a level 24 named bear that roams the forests of Ashenvale. He is normally found north of the Talondeep Path and west of Silverwind Refuge. Senani Thunderheart at Splintertree Post would like Ursangous' cold, dead paw. Much to the dismay of many hunters, he is untamable. This bear has a small quarter-crescent emblem on his paw, implying he was trained by night elves.[1]

It could be possible that Ursangous is a night elf druid of the claw that has lost himself to his animal aspect. This is supported in Warcraft 3 during the night elf campaign mission Brothers in Blood where Malfurion Stormrage discovers the druids of the claw and states that only the Horn of Cenarius can awaken them in their animal states. It is possible that Ursangous had left the cavern and therefore never heard the horn's call or maybe that he was too far gone to be awakened. This is unlikely as Senani states that the bear was trained by the night elves.