Ursol is an Ancient Guardian, one of the several demigods that were among the first living creatures to roam Azeroth. He and his twin brother Ursoc were worshipped as gods by the furbolg tribes.[2] 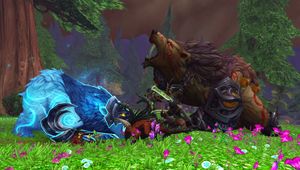 Ursol and Ursoc are patrons of those who favor balance of nature and the living beasts of the wild. Among their most loyal followers, the furbolgs, practice their respective customs; those who follow Ursol become shamans, while the others who follow on Ursoc become hunters or warriors and carve wood statues and structures. Timbermaw Hold in northern Felwood is an example, as the stronghold's entrance is a giant wood carved in the shape of a growling bear head — as homage to the twin bears.[citation needed]  A group known as the Druids of the Claw also revere the twin bears.[citation needed]

Many millennia ago, two inquisitive bear cubs roamed the area around the Grizzly Hills together. These brothers, named Ursoc and Ursol, had more curiosity than good sense, and they frequently found themselves trespassing in the domains of bigger predators. Danger did not discourage them, and each one never left the other behind, even when circumstances seemed dire. They caught the attention of Keeper Freya, who was traveling across Azeroth in search of exceptional wild animals. Freya recognized their potential and saw what they would become. When they matured, they grew stronger and bigger than any other bears in the Grizzly Hills, and they did not suffer the ravages of aging. Ursoc and Ursol became known as Wild Gods.[3]

For Ursol and other Wild Gods that were guardians of their domains, Freya crafted unique weapons, artifacts that could only become as strong as their wielder made them. Their true potential could only be unlocked with practice, nurture, and self-improvement. Some Wild Gods did not understand Freya's gifts and neglected their weapons; Ursol was not one of them. Freya gifted him a staff that eased the use of magic, and every day Ursol would train with it against his brother's own gift, the Claws of Ursoc. Ursoc's titansteel claws became an extension of his own body, and Ursol became an expert in manipulating the flows of magic. Together they had become two of the most powerful Wild Gods in existence, and soon they would become known as Azeroth's staunchest defenders.[3]

During the War of the Ancients, Ursoc and Ursol were the first to answer the call of Cenarius to combat the Burning Legion. They clashed with the doomguard, were eventually overwhelmed by fel stalkers, and died defending the land.[4] 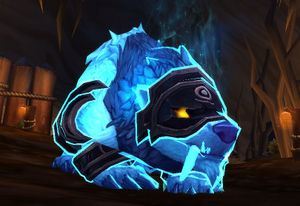 Ursol was called to his lair in Grizzlemaw to test a druid adventurer's worth in retrieving the Claws of Ursoc and aiding his brother's spirit against the Emerald Nightmare. After fighting the spirits of several furbolgs loyal to Ursol, the bear god gave the druid his blessing.

When Malorne becomes trapped in an Emerald Nightmare recreation of his death at the hands of Archimonde, figments of Ursoc and Ursol are seen battling demons during the War of the Ancients.[5] 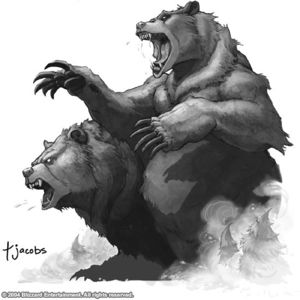 The enormous bears lumber forward, scanning their surroundings with much more than animal intelligence. When they turn to watch their flanks, they reveal the dark, glyph-like markings in their fur. Raising their heads and sniffing the air, they stop suddenly and flex their claws, ready for a fight.[6]

Ursol and Ursoc were well known friends to the Ancients and night elves, and hailed as gods by the furbolg tribes. The bears held glyph markings on their fur. Ursol and Ursoc visited the villages of the night elves, especially during festivals to the Moon. Ursol carved statues made of dead trees, while Ursoc was fond of brew. Both learned this from mortals. The brother bears would spend time allowing night elven children to mount them, and also spent time drinking ale with the night elves.[6] Ursol and Ursoc befriended generations of night elves and humans.[7]

Ursol was a fighter, warrior, healer and shaman. Combining their powers they would strike as one at any enemy with efficiency, using strength and magic. Typically, they would employ teamwork in combat so that they could use both strengths simultaneously. Ursol would move into position and use his shamanistic spells, while Ursoc lept into the fray to fight with tooth and claw. They had an instinct for leadership that helped to inspire their allies, but they were ferociously dedicated to one another and would step away from an engagement if the other was in need of help.[8]

It makes sense that the pandaren either worship, worshipped, or are possibly even akin to Ursoc and Ursol in much the same way as the dwarves/earthen were to the titans. This is given much credence by the pandaren's shamanistic culture and "earthy" civilization (Ursol), combined with their feral combat skills and love of brew (Ursoc). They also appear to have a friendly disposition and seem to be similar in many other ways as well.[9]

Furbolg follow in the path of the long-dead ursine demigods Ursoc and Ursol. Though written history says they perished, can Eternals who possess the immortality special quality truly die? Perhaps the "fallen" Eternals have simply slept away centuries while their wounds healed…[10]