Note: With the release of 6.0.2, many spells have been renamed, and much of the scripted command functionality has been modified. In an effort to keep Wowpedia posts relevant, please re-validate and re-post macros that work in the current version.

When re-creating a macro in Useful macros please 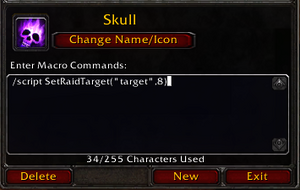 Add macros here that can be used regardless of spec

In Cataclysm, AoE with a target marked skull is a common tactic in mob fights. By both tank and dps focusing on the skull, dps are less likely to get the aggro. In this way the group needs to frequently marking skulls. This macro can help you mark skulls easily. When you press it, it automatically marks your current target as skull:

The same mechanism can be applies on any helpful spell, such as

[Lay on Hands] or

If your mouseover is your enemy, the macro will cast

[Fist of Justice] automatically works with this macro.

Self cast Word of Glory without losing a previous target

[Word of Glory] spell bind and Self-Cast key (by default it's Alt). This way you will have just one bind. Very useful for Retribution and Protection Paladins while soloing.

Macros for use with the Holy Paladin Build

[Lay on Hands] or

Allows the player to heal whatever focus targets (Ex: put focus on a boss and heal boss target). First step: select the non friendly target (boss, miniboss, trash etc, whatever) and use first macro to focus it:

Second step: spam this macro to heal whatever the boss, miniboss etc is targeting (mainly should be the tank but if tank loose aggro (aggro lose, fear or other strategy) you auto heal whoever boss is targeting 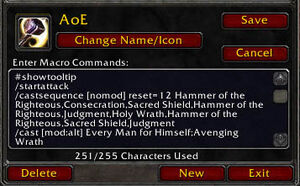 The automation of GCD rotation macro shown as in Blizzard macro editor. In this actual application, the macro has additional functions: When pressed with no modifiers, it casts the automated GCD rotation and uses

[Avenging Wrath] whenever possible; When pressed with alt key, it casts

[Every Man for Himself].

Macros for use with the Protection Paladin Build

In Mists of Pandaria, paladin tanking spells that are in the rotation comprises two distinguished types: several GCD spells such as

[Judgment] and two non-GCD spells include

[Shield of the Righteous]. In the ideal rotation, the casting sequence of GCD spells is static, while the use of

[Shield of the Righteous] is situational[1]. Such a design allows the automation of these GCD spells with a castsequence command. By doing so, paladin tank players can better focus on positioning, threat, and damage mitigation instead of which spell to cast, as the rotation has been simplified into two elements: pressing of the castsequence macro, which generates Holy Power, and use of the Holy Power (by

[Word of Glory] or

[Shield of the Righteous], based on the situation).

Comparing to other reported faceroll macros, automation of GCD, instead of automating the entire rotation, does not interfere with the situational use of

[Shield of the Righteous]. We write this macro as the following:

An action bar (the addon is Bartender4) with automation of GCD rotation macros, where button 1 is

[Shield of the Righteous], and button 4 the macro "Automation of GCD Rotation, ST (single target)."

To use the above macro, press the macro button in every GCD and cast

[Word of Glory] or

[Shield of the Righteous] when you want to use the Holy Power. In other words, you need at least three buttons for the rotation: the automation of GCD rotation macro,

[Word of Glory], and

[Shield of the Righteous].

[Avenger's Shield] is not in the above castsequence, and you can use it when you need silencing or additional threat for the targets.

Advance Use: Automation of GCD Rotation with Crusader Strike

[Crusader Strike] for single target tanking to hold a sufficient amount of threat, and thus the above macro does not cast

[Crusader Strike]. However, you can replace the

[Hammer of the Righteous] spells by

[Crusader Strike] spells in the castsequence, if you find it necessary. The following macro represents an alternative castsequence for the automation of GCD Rotation, where

[Hammer of the Righteous] spells are replaced by

Based on the 5.0 buffs and debuffs map, we do not need to cast

[Hammer of the Righteous] every 30 seconds to maintain

[Weakened Blows] debuff, as DPS DKs, druids, and warriors will do it[2]. You can modify the macro by changing one "Crusader Strike" into "Hammer of the Righteous" if you are the one to maintain the Weakened Blows debuff, so you will cast

[Hammer of the Righteous] in every 9 GCDs.

[Shield of the Righteous] and

[Word of Glory] whenever possible. As it is designed for spamming, Bubi recommends the application of "console Sound_EnableSFX" and "script UIErrorsFrame:Clear()" commands to eliminate error sounds and messages. 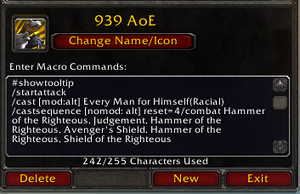 This tanking macro setup is made to make your tanking as a paladin easier[4]. Like all facerolling macros, this macro setup helps you decide which spell to use, so you can focus on tanking itself. This design is based on the 939 rotation proposed by Theck[5].

The setup is effective under 4.0.6 and all earlier versions of Cataclysm. 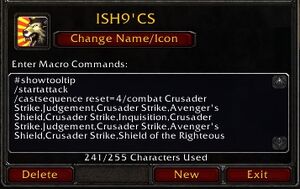 Furthermore, you can use WoG build for 939 rotation to provide some self healing. To do so, use the following castsequence to replace the 939's main castsequence. This is designed for single target use, because the macro casts

[Hammer of the Righteous] instead of

[Crusader Strike] reduces insignificant threat, it does not worth the two slots for Crusader Strike build branch castsequences as fillers. And since players can cast

[Word of Glory] separately on the third pressing of the filler, these branch castsequences can also fit WoG builds. An example of action bar using these macros is shown on the picture, where button ` is Branch Castsequence 2, 1 is

Macros for use with the Retribution Paladin Build

A useful Macro for CC.