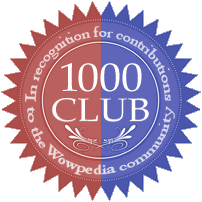 This user is a respected member of
the 1,000 club!

#FreeHongKong
#NoFlyNoSub - for what are we without the sky?
#NoFlyNoBuy - in solidarity with pro-fliers who will not accept anything less than having flight available at the start of Legion.

I am retired from World of Warcraft and all games produced by Blizzard Entertainment. I won't go into much depth here, for there are several places on other fan web sites that can do that much better. Suffice it to say: Too little, too late, Blizz. Liberate Hong Kong, the revolution of our times. 光復香港，時代革命!

The rest of this user page is kept for historical purposes only.

Lok'tar, online compatriots! My name is Aliok, and I have been a Warcraft player since WC3 first shipped. My main character on World of Warcraft is a troll mage that has been a pyromaniac since vanilla. [Aliok on WoWArmory.com] I enjoy playing all roles within the game on my various characters - rDPS, mDPS, healer, and tank - but I like getting achievements on my mage. :) I pretty much only play my mage these days. Cataclysm and MoP have really soured me on all my other characters, so I only put in the effort to get them leveled up for professions and recipes. Achievements are also account-wide now, so I'm not as much of an achievement hunter as I used to be.