This guideline outlines good practices to use for images uploaded to Wowpedia, and steps that can be taken to make them display better and/or become lighter for download.

For information about how to add images, see our guide to basic image syntax, as well as the Gamepedia Help Wiki's all-around image guides: Basic images and advanced images. 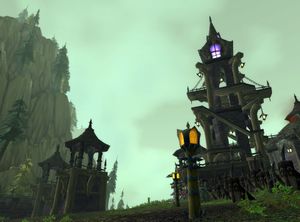 Images serve the important purposes of illustrating subjects and adding visual interest to articles. They can speak where words would fail. At the same time, however, misplaced or untidy images can detract from an article. When choosing images, keep in mind how they fit into an article: their placement, size, and the flow and readability of nearby text. Position images so that they work with the article rather than against it.

The "thumb" syntax (example: [[File:CoolImage.png|thumb]]) is a common way to insert images alongside text in a way that generally won't disturb readability. If no additional parameters are given, it will size the image automatically according to user preference and align the image to the right, allowing a smooth flow of text down the left margin. Although left-aligned images can be used, most images should be right-aligned for this reason. If an infobox is not being used in an article, a right-aligned picture in the lead section is encouraged.

An article that contains many images may begin to look bloated or cluttered. In this case, a gallery section can be a good solution. (describe galleries a bit?)

If a gallery has more than a couple of files, the packed gallery mode (<gallery mode=packed>) can allow for a cleaner look.

Another important factor to consider when choosing a potential image for an article is necessity. What is the image's purpose? What does it do for the article? The answer may range from "it illustrates a key point" to "it just looks nice," but in some cases, adding an image may be unnecessary:

Though images can portray many different subjects, each of which has different compositional needs, all screenshots share one important factor: graphics.

Higher graphics settings will generally improve the overall quality of a screenshot. However, while every bit can help, you don't need to set your graphics to "Ultra" across the board. Certain settings have a bigger impact than others—most notably, the anti-aliasing and texture resolution settings. These settings are key to getting quality screenshots!

Anti-aliasing has multiple settings that can be suitable for different subjects (try messing with them sometime!). MSAA 8x seems to be a safe option that offers both consistently smooth edges and fairly low loss of detail. Texture resolution, on the other hand, has only one setting that should be used for screenshots: high. Anything less will cause a loss of detail, and it can even make intricate textures look like a garbled mess.

In some cases, higher graphics can actually hinder a screenshot. For instance, shadows may fall on the subject in an undesirable way, or grass may get in front of your camera or cover parts of the subject. In these cases, lowering the related settings may help. Many environmental shadows will lighten or disappear with a lower shadow quality setting, and grass can be re-arranged or cleared away by reducing ground clutter.

Note that there are exceptions to every guideline; these are simply general guidelines that help to produce quality images in many situations. Use your own discretion on whether they're necessary for a particular image.

Photographs or renderings of physical objects should...

Images that require transparency should use the PNG file format. GIFs also handle transparency, but only in an on-off sense; they do not allow smooth shading (anti-aliasing) of edges, which is required to work with our different wiki skins, and they only support 256 colors. See the article on the GIMP for more information on how to do this.

Programs can be easier to use than the in-game screenshot system. Here is a list of programs that help crop an image before taking a screenshot.