Ahn'Saron, The Inner Kingdom is a zone of the Spider Kingdom located beneath the surface of Northrend. Passing through the ruins of Ahn'Vekir, the First City from the Shadow Web caverns is the only largely unguarded ground route to the Inner Kingdom. The Scourgewall and its passages from the Upper Kingdom are heavily patrolled by Newbreed forces, and virtually impassable on foot.

Another route to the Inner Kingdom can be found in Icecrown, beneath the citadel of the Lich King. This route involves traversing the perilous Forgotten Depths of Naz'Anak.

Ahn'Saron is the heart of the Spider Kingdom. Once a prosperous metropolis built in the darkness of Azeroth underworld, it is a broken shadow of its former glory. But the Inner Kingdom has begun to teem with life once again. In Ahn'Saron, the spider queen Nezar'Kali has birthed a new and terrible generation of nerubians - the Newbreed. Even more monstrous than their predecessors, these new nerubians have replicated and spread with frightening speed, bred to be the ultimate race of warriors and conquerors. Soon, the legions of Azjol-Nerub will fill their underworld to bursting, and will swarm up to the surface, wiping away all that the races who dwell in the sun have built, and ushering in the eternal dominance of the Spider Kingdom. 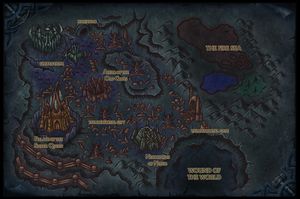 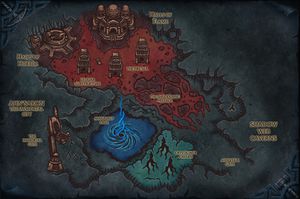 The Fire Sea, a subzone of the Inner Kingdom.

Ahn'Saron is a vast underground valley, deeper within the earth than any other region of the Spider Kingdom. Every cliff-face, chasm, and cavern wall is covered in nerubian construction, and their tunnels are carved deep into the stone. The temples and palaces of the nerubians stretch as far as the eye can see, and tower far overhead to touch the distant cavern ceiling. Natural stone pillars stretch to the cavern roof, each carved with enough nerubian buildings to hold the population of a small city. Stalactites reach down from the distance ceiling in a similar manner, and entire templates hang suspended from diamond-hard strands of webbing. The forces of the nerubians and the servants of the Old Gods hold full dominion here.

There are regions to the east where the cities of the Inner Kingdom do not reach. They come to a halt at the edge of the great Fire Sea, an ocean of molten lava that lights up the underworld like the sun. Here can be found the lowest reaches of the titan complex Ulduar. Great machines draw upon the energy of Azeroth's burning magma to fuel the vast titan city.

A more detailed overview of the Inner Kingdom's subzones can be read here.

- The Halls of Flame - This titan structure provides geothermal power to the entire Ulduar complex, and the Twilight cult are attempting to sabotage it.

- The Halls of Horror - A titan containment facility, imprisoning some of the most terrible monsters ever encountered from Azeroth's ancient history.

- Altar of the Old Gods - One of the oldest temples on Azeroth, this place of worship offers up sacrifices and benediction to the Old Gods.

- Necropolis of Nerub - An ancient structure holding the nerubian dead of thousands of years. The remnants of the undead Scourge seek to raise an unstoppable army here.

- Palace of the Spider Queen - The last stronghold of the nerubians. Deep within the Royal Quarter is the queen of the entire sinister race, a creature of terrible power who hates all that dwell in the light.

Ahn'Saron provides a wide range of quests for players to complete, and contains the highest level of content available. Players arriving from the Shadow Web Caverns are likely to still be at level 91, but will soon find themselves at level 92, prepared to meet greater challenges.

The Inner Kingdom at Level 91

The Inner Kingdom at Level 92

The Inner Kingdom at Level 93