At the height of the Spider Kingdom's prosperity, the fortress of Doorward was once a great temple devoted to the Old Gods. Here, the nerubians gave praise to Yogg-Saron, the Beast with a Thousand Maws, and made sacrifices to him. When the Scourge devastated this portion of the Spider Kingdom, the Lich King first learned of the Old Gods and their power, and discovered the black blood that would become the metal saronite, a vital element to his future war effort.

After the fall of the Spider Kingdom and the ascension of the Lich King, the abandoned temple complex become a stronghold for Baelgun Flamebeard and his allies, who vowed to prevent the evils hiding deep within Azeroth from escaping. While Baelgun and the forces of Doorward have occupied the upper chambers and driven out the evil there, their fortress is far from secure - the lower catacombs remain infested with undead, mindless in the wake of the Lich King's demise. Darker horrors lurk in the shadow that constantly whisper in the minds of all dwelling in Doorward, luring those who weaken to their doom. Many heroes and champions have ventured into the Underhalls, seeking to put an end to the evil there - and have never been heard from again. 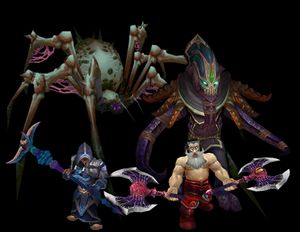 The bosses of Doorward Underhalls

Darkspeaker Mee'gah
One of the dread Faceless Ones from deep beneath the Spider Kingdom. He has come to the Amber Sepulcher to feed on the lingering souls of the nerubians entombed there.

Dreadskitter
A giant spider that prowls the depths of the Underhalls.

Murdra Gloryhammer, Priestess of Yogg-Saron
Once a priest of the Light, Murdra and her comrades ventured into the Underhalls to put an end to the evil there once and for all. Instead, Murdra has fallen under the sway of the dark powers of the Old Gods. 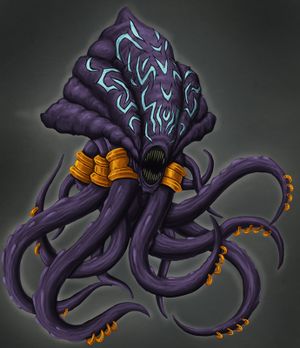 Sylla'ban, Whisper of the Unspoken. Heroic Mode only boss.

Sylla'ban, Whisper of the Unspoken (Heroic mode only)
A Voiceless One.

Heroic Mode for Doorward Underhalls can be activated by players at level 93.